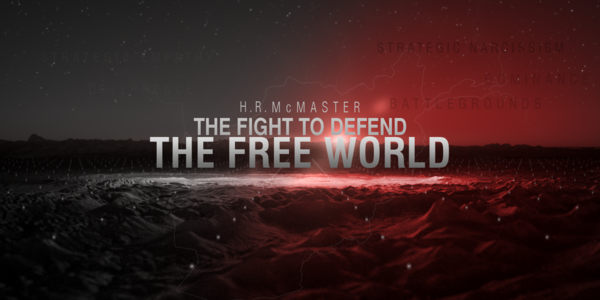 The series, based on McMaster’s recently released book Battlegrounds, demonstrates that these challenges derive from three flawed assumptions held by US policy makers since America’s lopsided victory over the Soviet Union at the end of the Cold War: 1) that the arc of history favors societies that are open and democratic over those that are closed and authoritarian; 2) that the rule of law would increasingly govern the conduct of nations throughout the world; and 3) that the unrivaled military power of the United States would provide it full-spectrum dominance over prospective adversaries. The introductory video in the series, “Embracing Strategic Empathy,” can be viewed here.

McMaster argues that history has proven this mindset wrong over the past thirty years. The world has seen a revanchist Russia—though not nearly as militarily capable as it was during the Soviet era—wage asymmetric attacks against its neighbors and disseminate disinformation into Europe and the United States for the purpose of sowing social and political divisions and undermining essential institutions. China has exploited access to Western markets and technology and has in turn used its rapidly accumulated national wealth to conduct mass surveillance on its own citizens, launch hostile military incursions in the Taiwan Strait and the South China Sea, and create debt traps for countries via multibillion-dollar financing of infrastructure projects. In addition, parts of the Middle East and the Asian subcontinent became breeding grounds of Islamic jihadism, which culminated in terror attacks all over the world, including those of September 11, 2001.

McMaster believes that these flawed assumptions are symptoms of what historian Zachary Shore calls strategic narcissism, that is, “the tendency to define problems as we would like them to be and only in relation to ourselves.” McMaster argues that such a worldview assumes that other countries lack agency and aspirations, and leads policy makers to make decisions based on their own preferences instead of what the situation demands. For example, McMaster notes that the long and costly wars in Iraq and Afghanistan have caused growing public sentiment towards retrenchment in the United States. The consequences of disengagement, he believes, are the reduction of America’s strategic competence and confidence, and ultimately less freedom, security, and prosperity in the world.

Conversely, McMaster argues that policy makers should adopt strategic empathy, which considers the ideology, emotions, and aspirations that drive and constrain the behavior of other state actors. This understanding would allow the United States to design strategies for worthy sustainable outcomes at acceptable costs.

“In this series, we will examine key battlegrounds that affect America’s security and vital interests,” McMaster said. “We will examine the key assumptions upon which previous policies rested, endeavor to understand crucial challenges to national security based, in part, on what our adversaries want to accomplish, and suggest what the United States and like-minded partners should do to secure a better world for future generations.”

Episodes of the series focus on security challenges faced by America and its partners, including those posed by Russia, China, Afghanistan, North Korea, and Iran, as well as growing sentiments toward retrenchment in the United States.

Russia:  McMaster explains how the United States and its security partners need to abandon their conciliatory approach toward Russia and directly take on the Kremlin’s campaign of disinformation, denial, and technological disruption against American and European democratic institutions and processes. McMaster advocates that the United States and Europe parry President Vladimir Putin’s actions by forging unity in their respective societies and exposing the Kremlin’s vulnerabilities via truth-telling and amplifying the voices of Russia’s dissidents.

China: McMaster argues that US policy makers were mistaken in their belief that economic engagement towards Beijing would lead Chinese society towards democratization. Instead, China has exploited the goodwill of democratic nations in order to expand its surveillance state and aggressively advance its interests internationally. He asserts that because China faces looming social and economic challenges as a result of an aging population, it has a narrow window of opportunity to shift the global balance of power toward its favor. McMaster believes that the United States should work with like-minded countries to deter China’s export of its authoritarian model of governance and persuade Beijing that greater government transparency and compliance with international rules is in its national interest.

Afghanistan: McMaster believes that American policy makers’ inconsistent strategies and short-term mindset have undermined US-led multinational forces’ effort over two decades to pacify Afghanistan. He advocates a strategy of strengthening the Afghan military, dismantling the ecosystem of terrorism in South Asia, and convincing neighboring Pakistan to engage in diplomacy for a peaceful resolution to the conflict.

North Korea: McMaster explains that a nuclear-armed North Korea would threaten the regional order in Asia. He says previous presidential administrations’ attempts to engage North Korea diplomatically have been counterproductive, with the Kim regime continuing to extort massive sums of money and to conduct nuclear enrichment and missile testing. McMaster advocates a policy of enforcing tough sanctions until the Kim regime demonstrates verifiable progress towards denuclearization, and convincing Beijing that it is also in its interest to work with Washington on Pyongyang’s disarmament.

Iran: McMaster asserts that Iran’s nuclear ambitions can only be countered if the United States and its partners have effective deterrence in place. Historically, when the United States has imposed high financial or physical costs on Tehran, the results have been favorable. In 2018, following pressure by US-led sanctions, Iran agreed to return to the negotiating table over its nuclear program. US forces also retaliated Iran’s assault on the US Embassy in Baghdad and the murder of an American contractor with a drone strike on Iran’s military leader Qassim Soleimani at Baghdad International Airport in early 2020. Following the latter incident, Tehran responded tepidly, fearing further US military action. McMaster holds that the United States should coordinate with allies in imposing maximum pressure on Iran, disrupt its paths toward nuclear weapons, and support popular sentiment against the ruling regime.

American Retrenchment: McMaster argues that United States’ disengagement from the Middle East and other parts of the world won’t insulate it from attacks on American citizens, territory, and interests. Such attitudes, he maintains are the “archetype of strategic narcissism,” because they are based on the belief that America’s absence from the world will reduce tensions. McMaster explains that US troop withdrawal from Iraq in 2011 led to the rise of the Islamic State, a civil war in Syria in which Russia and Iran sustained the Assad regime, and a refugee crisis that placed enormous pressure on America’s allies in Europe. Furthermore, McMaster maintains that it is costlier to redeploy forces to stabilize a region under duress than to work with partners in sustained efforts to secure free and open societies against hostile and authoritarian actors.

Click here to view the entire series at PolicyEd.org.