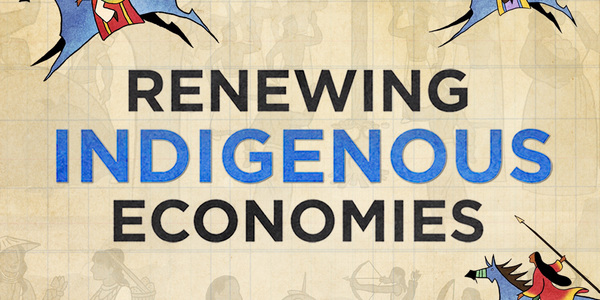 The videos tell the story of the economic prosperity which characterized indigenous societies before Europeans arrived on American soil, and how after centuries of persecution by the federal government, these societies became among the poorest minorities in the United States.

The videos also demonstrate that by restoring dynamic customs, rebuilding economic institutions, and strengthening tribal rule of law, Native Americans can be become empowered to achieve the freedom, prosperity, and sovereignty they once enjoyed.

Colonialism: Then and Now - Colonial-era policies and paternalistic attitudes continue to restrict economic activity on reservations.

A New Path Forward - As tribal leaders rebuild their nations and renew their economies, it is time to liberate Native Americans from federal oversight.

Hoover Senior Fellow Terry Anderson’s interest in indigenous culture began at an early age during visits to his uncle’s ranch in northwest Montana, in the middle of the Blackfeet Nation reservation. He learned from tribe member Francis Calf Looking how to ride horses and herd cows, which instilled in him a deep connection to the land inhabited by Blackfeet for centuries.

His fascination with the first Americans continued into adulthood. However, the poverty and despair that frequently plagues life on reservations throughout America became ever more glaring. Throughout his education and developing career as an economist, he wanted to understand why Native Americans were so impoverished and what could be done about it.

After receiving his PhD in 1972, Anderson visited the Flathead Nation, also located in northwest Montana. In the mostly dilapidated conditions of the reservation, he was surprised to visit a spacious home situated on several acres of pristine landscape.

“I asked the tribe member who lived there about this quite obvious anomaly on the reservation,” Anderson recalled. “He responded: ‘I own this place.’”

Anderson was dumbfounded. He believed that reservation lands were held in common by the tribe.

The man started to grow impatient with Anderson’s subsequent inquiries.

“I own this place!” the man repeated.

This encounter prompted Anderson to study the correlation between property ownership and economic progress on Native American lands.

Anderson explains that the impoverished conditions on reservations largely stem from their relationship with the federal government, which over the past three centuries has systematically destroyed the sovereignty of tribal nations and upended the way of life for the average Native American.

He says that a significant turning point for Native American societies dates back to the American Civil War, when the Union expanded the role of its standing army. In the previous century, since the founding of the United States, the government left its citizens on their own to muster militias for their defenses against Indian tribes. In battles, Indians were almost always at a distinct strategic advantage. They had a longer history with the terrain, and their arsenals of bows and arrows projected at a faster rate than the Americans’ muskets. Consequently, concern about significant potential losses almost always forced Americans to negotiate treaties with their Indian counterparts. By contrast, the standing army had sophisticated weaponry and could conscript vast numbers of soldiers. As the United States sought westward expansion following the Civil War, the tribes proved no match.

Anderson explained that even before this bolstering of the standing army, the federal government’s poor treatment of Native Americans started to coalesce into policies. In 1830, Congress passed the Indian Removal Act, which resulted in the resettlement of tribes to lands west of the Mississippi River, including the forced relocation of the Cherokees from Georgia to Oklahoma, an episode that became known as “The Trail of Tears.”

In a trilogy of Supreme Court decisions in the 1830s, Chief Justice John Marshall wrote majority opinions stating that the tribes’ relationship with the federal government was that of “a ward to its guardian.” The court also held that the tribes were excluded from state laws and prohibited from selling land to private parties. These decisions provided the basis for future laws that culminated in the US government’s administration over land inhabited by Native Americans. According to federal law, the US government holds legal title to the land, and the tribes and their members have only a beneficiary interest, unless the government deems them “capable and competent.” In fact, tribal members were not declared US citizens until 1924.

The tribes’ loss of ownership, authority, and self-sufficiency led to their subsequent dependence on an expanding federal bureaucracy, especially in matters of the economy, housing, and social welfare. In addition, the government made attempts in the twentieth century to assimilate Indians into urban areas and end the reservation system altogether.

In his field surveys in Indian country, Anderson has found a consistent pattern of economic success where individual property ownership is prevalent. In this process, he has met indigenous leaders across North America and the world who advocate for greater political and economic sovereignty for their people. These discussions with tribal leaders became the basis of the Alliance for Renewing Indigenous Economies, cofounded by Anderson with Manny Jules, chief of the Kamloops Indian Band of the Shuswap Nation in British Columbia; and Te Maire Tau, director of the Ngāi Tahu Research Centre at the University of Canterbury and member of the Ngāi Tahu tribe on New Zealand’s southern island.

In 2017, in partnership with the Alliance, Anderson launched the Renewing Indigenous Economies Project (RIEP) at Stanford University’s Hoover Institution. The mission of the RIEP is to conduct research to inform and promote policies that empower indigenous people to regain control over their lives and resources. The project has produced policy recommendations, as well as essays and educational videos on Hoover’s PolicyEd platform. Hoover is also planning to host seminars on this subject for indigenous university students, scheduled to take place virtually in August 2020 and on-campus when Stanford University reopens for students.

In the third decade of twenty-first-century America, why are Anderson and tribal leaders promoting the renewal of indigenous economies?

Anderson is especially inspired by the ethos of Chief Joseph, who led the Nez Perce Indians in resistance to settlers of the Oregon Territory before surrendering to the US Calvary in 1877. Chief Joseph later visited Washington, DC, making a plea to government officials and saying in part: “Let me be a free man, free to travel, free to stop, free to work, free to trade where I choose, free to choose my own teachers, free to follow the religion of my fathers, free to talk, think and act for myself—and I will obey every law or submit to the penalty.”

Anderson contends that Chief Joseph’s view embodies the spirit of indigenous Americans prior to the arrival of Europeans. He points to archaeological evidence that demonstrates how various tribes built economically sophisticated trading networks with one another. The Chaco Canyon civilization in New Mexico, for example, was a central node that allowed for the exchange of goods that originated from points as far north and south as Alaska and South America. In the Mandan trading villages of the Dakotas could be found pipestone from Minnesota, seashells from the Pacific Northwest, turquoise from the Southeast, and obsidian from Yellowstone.

Anderson and leaders within the Alliance believe that strengthening tribal laws, rather than the continued reliance of repressive federal laws, is the most effective strategy to restore free societies and prosperous economies in indigenous peoples’ lands.

As an example, Anderson tells a success story about the Winnebago tribe of Nebraska, which created Ho-Chunk Inc., an economic development corporation that operated outside the scope of federal law pertaining to Indians. The Winnebago government generated revenue from the tribe’s casino industry, which it then transferred to Ho-Chunk for the financing of infrastructure projects in order to attract additional investment and businesses to the reservation.

Anderson also makes a strong case for the transfer of federal reserved land directly to Indian tribes. In 1976, Congress passed the Indian Self-Determination Act, which allowed the Confederated Salish and Kootenai Tribes to obtain a contract for management of their forest land from the Bureau of Indian Affairs. The tribes proved they could better manage their forests, earning $2 for every dollar spent while improving water quality, tree health, and wildlife habitat.

Anderson maintains that though Native Americans won’t likely achieve full autonomy in the United States, strengthening tribal law and limiting the scope of the federal government can enable tribes to achieve sovereignty comparable to that of each of the fifty states. And although he is proud that the Hoover Institution can provide fresh perspectives on the improvement of tribal economies and societies, he says it’s up to the Native people to decide which policies work for them.