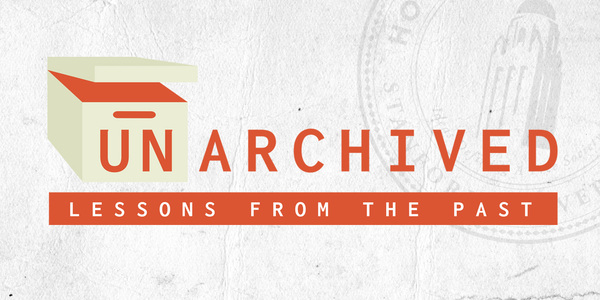 PolicyEd Releases New Video Series, UnArchived: Lessons from the Past

The objective of UnArchived is to demonstrate how historical analysis can both inform modern-day challenges and explain why given policies in the past were successes or failures.

“Herbert Hoover communicated that the mission of the Hoover Institution is to recall man’s efforts to make and preserve peace, and sustain the American way of life, through the study of the extraordinary records it has acquired,” said Eric Wakin, director of the Hoover Library & Archives. “Today, more than one hundred years after its founding, the Hoover Institution, via its PolicyEd platform, has continued to bring these records to life for a global audience, which can use them to inform policy choices.”

The first episode, “Deterrence in Foreign Policy: Lessons from World War II,” is based on The Second World Wars: How the First Global Conflict was Fought and Won, authored by Victor Davis Hanson, Martin and Illie Anderson Senior Fellow and chair of Hoover’s Role of Military History in Contemporary Conflict working group.

This episode argues that an effective policy of deterrence depends not just on a nation’s military capability but also the willingness to use its power. World War II provides a relevant example of this principle, because the Allied powers, which possessed superior weaponry to the Axis powers and had three times the industrial capacity, ultimately projected weakness when Germany invaded Poland, Czechoslovakia, and other parts of the European continent. If the Allies acted earlier against German aggression, they might have been able to avert war and save millions of lives.

The video then argues that today, more than seventy-five years after the end of World War II, the United States tragically still has not learned its lesson. Despite the nation’s being by far the world’s strongest military power, its political leadership in recent decades has frequently projected weakness and indecision to its enemies and it has also been bogged down by questionable wars and interventions. These policy failures have enabled belligerent actors such as North Korea and Iran to gain more confidence and realize that they can profit from a strategy of aggression.

“Throughout history, conflict had always broken out between enemies when the appearance of deterrence—the material and spiritual likelihood of using greater military power successfully against an aggressive enemy—vanished,” writes Hanson in The Second World Wars. “From Carthage to the Confederacy, weaker bellicose states could convince themselves of the impossible because their fantasies were not checked earlier by cold reality.”

Upcoming videos in the UnArchived series include the work of John B. Taylor on the consequences of the Nixon administration’s decision to implement wage and price controls to halt inflation, as well as the writings of Stephen Kotkin and Robert Conquest based on collections from the Hoover Library & Archives.

Click here to view the entire series at PolicyEd.org.