Environmental progress is more likely to occur in free-market systems due to their robust, tradeable, and enforceable property rights.

“A Better Way to Preserve the Environment,” with Terry Anderson

“Is Government Regulation the Solution?” by Terry Anderson and Gary D. Libecap

Cambridge University Press
Up Next Constitutional Safeguards Against Socialism

Economic Growth: The Path to a Cleaner Environment
Previous
Next 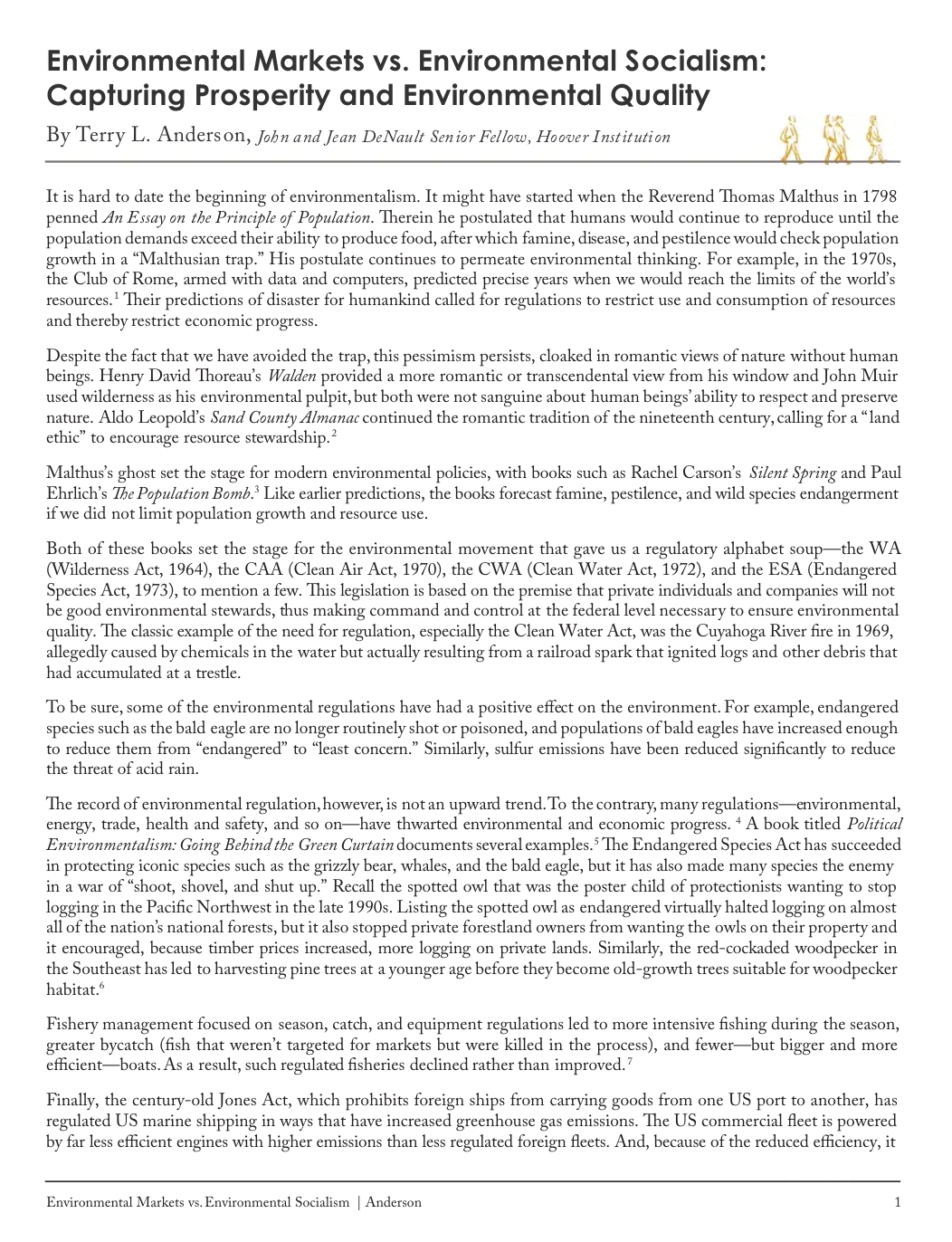 It is hard to date the beginning of environmentalism. It might have started when the Reverend Thomas Malthus in 1798 penned An Essay on the Principle of Population. Therein he postulated that humans would continue to reproduce until the population demands exceed their ability to produce food, after which famine, disease, and pestilence would check population growth in what has come to be called a “Malthusian trap.” His postulate continues to permeate environmental thinking. For example, in the 1970s, the Club of Rome, armed with data and computers, predicted precise years when we would reach the limits of the world’s resources. Its predictions of disaster for humankind called for regulations to restrict use and consumption of resources and thereby restrict economic progress.

Even though we have avoided Malthus’s trap, this pessimism persists, cloaked in romantic views of nature without human beings. Henry David Thoreau’s Walden provided a romantic, transcendental view from his window and John Muir used wilderness as his environmental pulpit. Both were not sanguine about human beings’ ability to respect and preserve nature. In the twentieth century, Aldo Leopold’s A Sand County Almanac continued the romantic tradition of the nineteenth century, calling for a land ethic to encourage resource stewardship.

Malthus’s ghost set the stage for modern environmental policies with books such as Rachel Carson’s Silent Spring (1962) and Paul and Anne Ehrlich’s Population Bomb (1968). Like earlier predictions, the books forecast famine, pestilence, and wild-species endangerment if humanity did not limit population growth and resource use.

Both of these books set the stage for the environmental movement that gave us a welter of legislation based on the premise that private individuals and companies will not be good environmental stewards, and thus command and control at the federal level is necessary to ensure environmental quality. The classic example of the need for regulation, in this case the Clean Water Act, was the Cuyahoga River fire in 1969, allegedly caused by chemicals in the water but actually resulting from a railroad spark that ignited logs and other debris that had accumulated at a trestle.