"John Taylor on Wages, U.S. Economy and the Taylor Rule" on Bloomberg

“A New Opportunity for Monetary Reform” by John Taylor

"Rules for International Monetary Stability: Past, Present, and Future" by Michael D. Bordo and John B. Taylor

"The Taylor Rule and the Transformation of Monetary Policy" edited by Evan F. Koenig, Robert Leeson, George A. Kahn

“National and International Monetary Reform,” chapter by John B. Taylor in Blueprint for America

Hoover Press
Up Next Reducing Carbon Emissions with Nuclear Power

The Taylor Rule and the Transformation of Monetary Policy 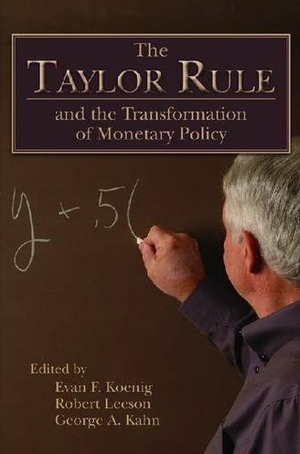 Twenty years ago, John Taylor proposed a simple idea to guide monetary policy. Quickly the idea spread, not only through academia, but also to the trading floors of Wall Street and the Federal Reserve's boardroom in Washington. Now, two decades later, the Taylor rule remains a focal point for discussions of monetary policy around the world.

In The Taylor Rule and the Transformation of Monetary Policy, a veritable contributors' "who's who" from the academic and policy communities explain and provide perspectives on John Taylor's revolutionary thinking about monetary policy. From the Great Inflation of the 1970s through the Great Moderation of the 1980s and 1990s to the Great Deviation following the 2001 recession, the contributors analyze Taylor's influences on monetary theory and policy around the world. They explore some of the literature that Taylor inspired and help us understand how the new ways of thinking that he pioneered have influenced actual policy here and abroad.