The failure of California’s high-speed rail project demonstrates that everyone loses when politicians make promises they can’t keep.

“A Closer Look at the Left’s Agenda: Scientific, Economic, and Numerical Illiteracy on the Campaign Trail” by Michael J. Boskin

California On Your Mind

“The Road (and Rail and Reservoirs) Ahead: Can California Be Innovative—and Sensible?” by Bill Whalen

Eureka
Up Next The Politics of Institutional Reform

A Closer Look at the Left’s Agenda: Scientific, Economic, and Numerical Illiteracy on the Campaign Trail, by Michael J. Boskin 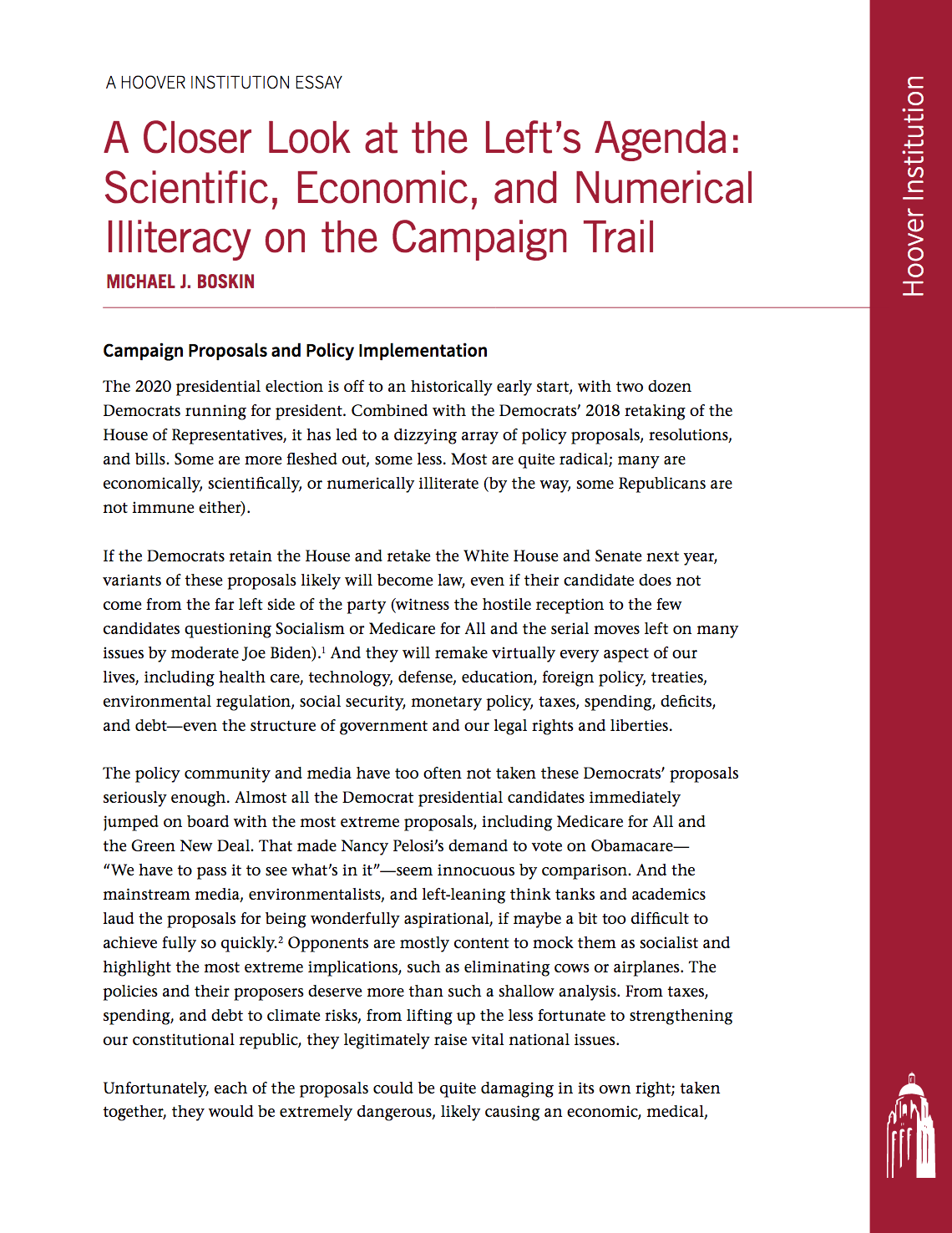 California’s high-speed rail fiasco, an example of the high-speed rail that Joe Biden foolishly proposes to complete in his Green New Deal lite climate plan, is instructive. A decade ago, voters approved a $9 billion bond measure out of an estimated $33 billion total cost for a high-speed rail line that promised a trip between Los Angeles and San Francisco in two hours and forty minutes. Due diligence reports noted that no high-speed rail system in the world achieved the promised speeds and safety requirements, and the state’s Legislative Analyst Office criticized virtually every assumption in the report as unrealistic and blasted the High-Speed Rail Authority’s serial mismanagement.

The balance of $24 billion was supposed to come from the private sector and the federal government. About $2.5 billion came from the 2009 Obama stimulus funding. When groundbreaking was finally announced in Fresno in 2015, the promised federal and private funding was, to be generous, nowhere in sight, save about $0.9 billion in since-canceled federal funds. And of course, spending the funds six to eight years later did nothing to accomplish the putative goal of the stimulus spending: alleviating unemployment in the Great Recession.

The High-Speed Rail Authority announced a new revised cost estimate of about $100 billion in 2012, three times the original cost and ten times the cost Californians were originally promised would cap their payments. It was outrageous that Governor Brown did not halt things at that point or at least send it back to voters to decide if they wished to continue. Amid an uproar, the Authority shortly thereafter issued a revised report saying the cost would be “just” $68 billion—twice, not three times, the original estimate. Asked how they got the cost down, the head of the Authority replied that it was due to the optimism of our engineers.

Few paid much attention to the details of the report, but its main takeaway was that a lot of existing rail was going to be used to reduce the cost. Many communities don’t want these trains whizzing by. So high-speed rail became blended-speed rail, and the trip from LA to San Francisco would be much slower. The next problem was revealed when the project started drilling in previously seismically unmapped regions of the Tehachapi Mountains north of Los Angeles. It was much slower, costlier, and seismically riskier than anticipated. So much for the engineering optimism. The political solution was simple: just shift the first major phase, which went from the Central Valley south to Los Angeles, to a segment from the Central Valley north to San Jose. Once that phase was built, regardless of time delays and cost overruns, it would be impossible to stop the second half of what was very likely to become the biggest boondoggle in California history.

Then came the early steps of the very first short phase within the Central Valley, from Bakersfield to Merced, and another cost overrun: an overall new estimate of $77 billion (or up to $98 billion with less optimistic assumptions), not counting the large operating deficit run by almost all high-speed rail trains globally. And this for a mixed-speed 1970s technology that was beyond optimistically scheduled to begin serving riders in 2033.