"The Bonds of Colonialism," by Terry Anderson

Defining Ideas
Up Next A New Path Forward

Colonialism: Then and Now
Previous
Next

The Bonds of Colonialism
by Terry Anderson

“They [Indians] are in a state of pupilage; their relation to the United States resembles that of a ward to his guardian.” ~ Chief Justice John Marshall, 1831 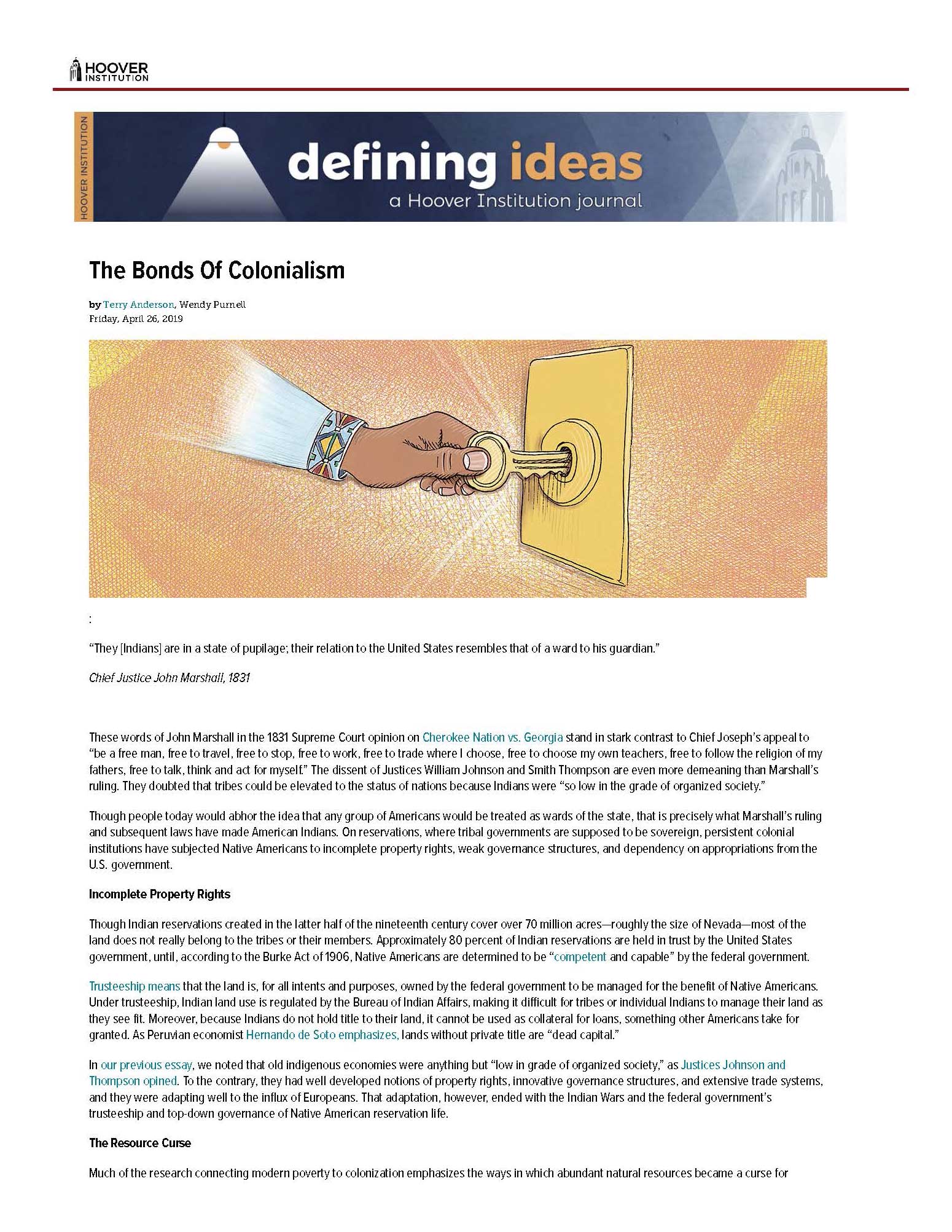 These words of John Marshall in the 1831 Supreme Court opinion on Cherokee Nation vs. Georgia stand in stark contrast to Chief Joseph’s appeal to “be a free man, free to travel, free to stop, free to work, free to trade where I choose, free to choose my own teachers, free to follow the religion of my fathers, free to talk, think and act for myself.” The dissent of Justices William Johnson and Smith Thompson are even more demeaning than Marshall’s ruling. They doubted that tribes could be elevated to the status of nations because Indians were “so low in the grade of organized society.”

Though people today would abhor the idea that any group of Americans would be treated as wards of the state, that is precisely what Marshall’s ruling and subsequent laws have made American Indians. On reservations, where tribal governments are supposed to be sovereign, persistent colonial institutions have subjected Native Americans to incomplete property rights, weak governance structures, and dependency on appropriations from the U.S. government.

Though Indian reservations created in the latter half of the nineteenth century cover over 70 million acres—roughly the size of Nevada—most of the land does not really belong to the tribes or their members. Approximately 80 percent of Indian reservations are held in trust by the United States government, until, according to the Burke Act of 1906, Native Americans are determined to be “competent and capable” by the federal government.

Trusteeship means that the land is, for all intents and purposes, owned by the federal government to be managed for the benefit of Native Americans. Under trusteeship, Indian land use is regulated by the Bureau of Indian Affairs, making it difficult for tribes or individual Indians to manage their land as they see fit. Moreover, because Indians do not hold title to their land, it cannot be used as collateral for loans, something other Americans take for granted. As Peruvian economist Hernando de Soto emphasizes, lands without private title are “dead capital.”

In our previous essay, we noted that old indigenous economies were anything but “low in grade of organized society,” as Justices Johnson and Thompson opined. To the contrary, they had well developed notions of property rights, innovative governance structures, and extensive trade systems, and they were adapting well to the influx of Europeans. That adaptation, however, ended with the Indian Wars and the federal government’s trusteeship and top-down governance of Native American reservation life.