As tribal leaders rebuild their nations and renew their economies, it is time to liberate Native Americans from federal oversight.

"Beyond Transfers: A New Fiscal Relationship," with Michael LeBourdais

"Read President Nixon’s Special Message on Indian Affairs," at the National Congress of the American Indians

A New Path Forward
Previous
Next

"We've taken control of our destiny, gotten a taste of independence, and don't plan on giving it up. Government-led economies have been a total failure. I refuse to believe the Winnebagos are Karl Marx's last hope.”  ~ Lance Morgan 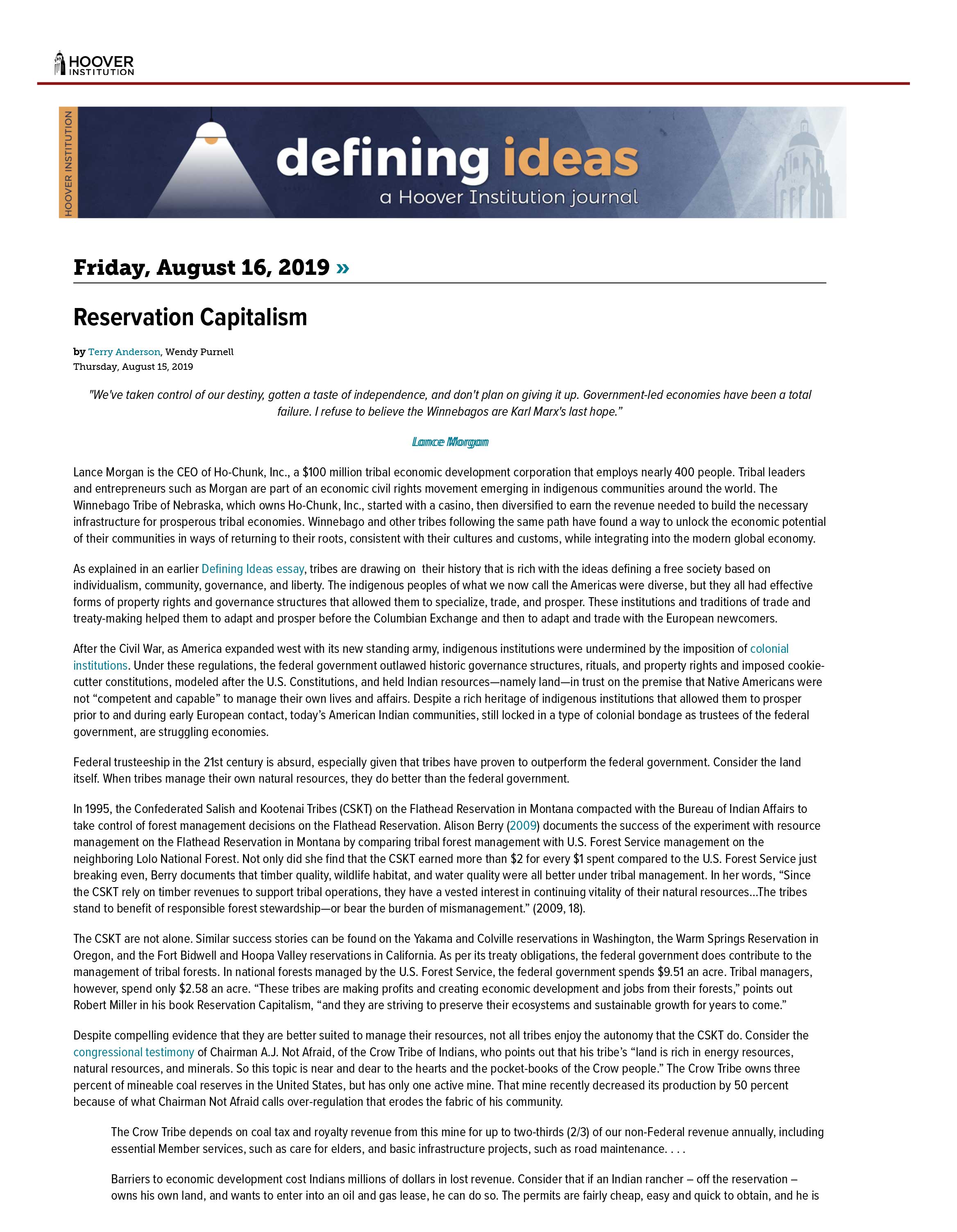 Lance Morgan is the CEO of Ho-Chunk, Inc., a $100 million tribal economic development corporation that employs nearly 400 people. Tribal leaders and entrepreneurs such as Morgan are part of an economic civil rights movement emerging in indigenous communities around the world. The Winnebago Tribe of Nebraska, which owns Ho-Chunk, Inc., started with a casino, then diversified to earn the revenue needed to build the necessary infrastructure for prosperous tribal economies. Winnebago and other tribes following the same path have found a way to unlock the economic potential of their communities in ways of returning to their roots, consistent with their cultures and customs, while integrating into the modern global economy.

As explained in an earlier Defining Ideas essay, tribes are drawing on  their history that is rich with the ideas defining a free society based on individualism, community, governance, and liberty. The indigenous peoples of what we now call the Americas were diverse, but they all had effective forms of property rights and governance structures that allowed them to specialize, trade, and prosper. These institutions and traditions of trade and treaty-making helped them to adapt and prosper before the Columbian Exchange and then to adapt and trade with the European newcomers. 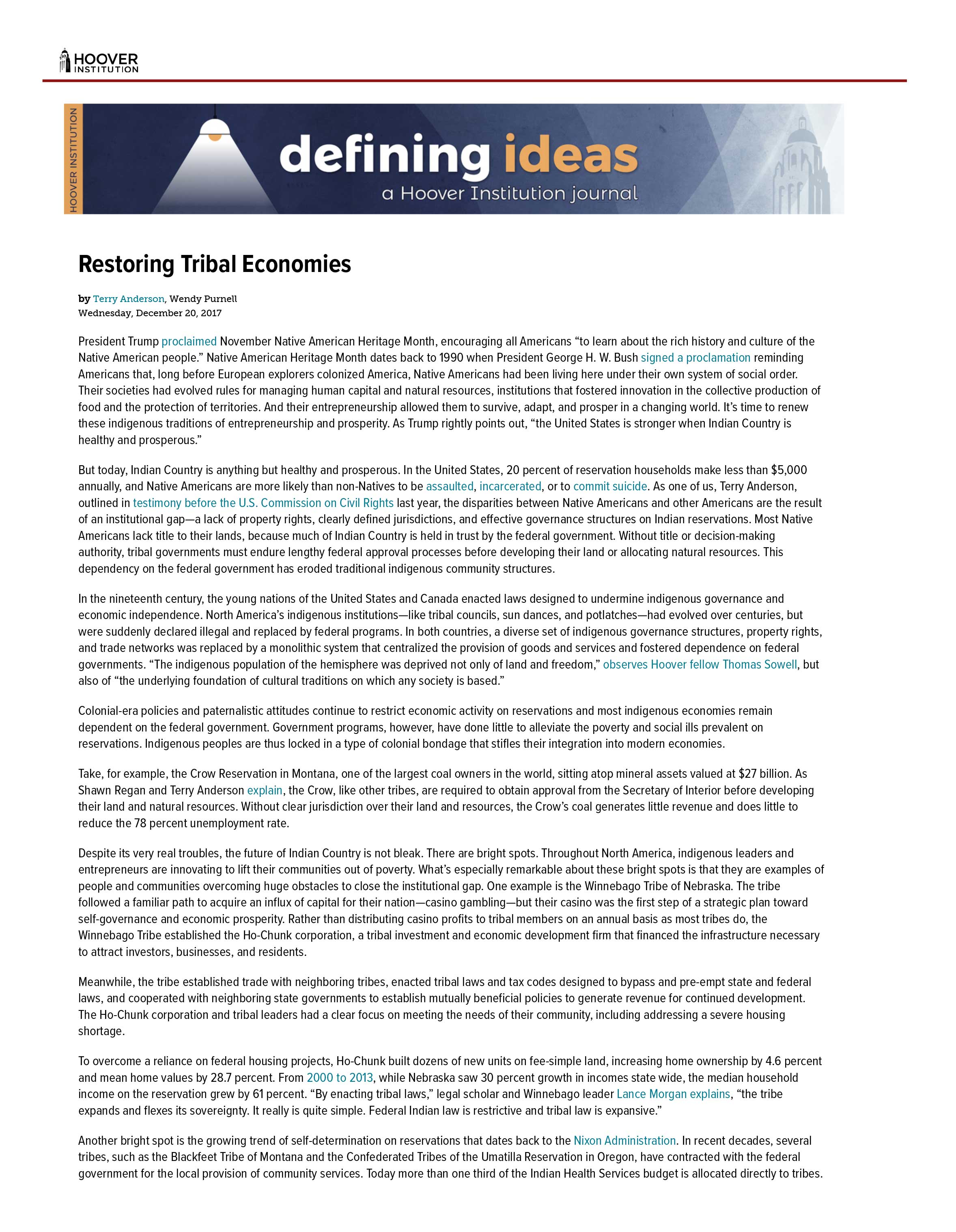 President Trump proclaimed November Native American Heritage Month, encouraging all Americans “to learn about the rich history and culture of the Native American people.” Native American Heritage Month dates back to 1990 when President George H. W. Bush signed a proclamation reminding Americans that, long before European explorers colonized America, Native Americans had been living here under their own system of social order. Their societies had evolved rules for managing human capital and natural resources, institutions that fostered innovation in the collective production of food and the protection of territories. And their entrepreneurship allowed them to survive, adapt, and prosper in a changing world. It’s time to renew these indigenous traditions of entrepreneurship and prosperity. As Trump rightly points out, “the United States is stronger when Indian Country is healthy and prosperous.”

But today, Indian Country is anything but healthy and prosperous. In the United States, 20 percent of reservation households make less than $5,000 annually, and Native Americans are more likely than non-Natives to be assaulted, incarcerated, or to commit suicide. As one of us, Terry Anderson, outlined in testimony before the U.S. Commission on Civil Rights last year, the disparities between Native Americans and other Americans are the result of an institutional gap—a lack of property rights, clearly defined jurisdictions, and effective governance structures on Indian reservations. Most Native Americans lack title to their lands, because much of Indian Country is held in trust by the federal government. Without title or decision-making authority, tribal governments must endure lengthy federal approval processes before developing their land or allocating natural resources. This dependency on the federal government has eroded traditional indigenous community structures.