Back to top
Civics
Economics
The Human Prosperity Project
Contributing Scholar: Elizabeth Economy
The China Model: Not One to Emulate

Though the Chinese model of governance is appealing to many authoritarian leaders, its absence of democratic norms and institutions encourages corruption and constrains healthy economic growth.

“Democracy and Authoritarianism,” with Elizabeth Economy and Larry Diamond.

“An Order Aligned with Chinese Values,” by Elizabeth Economy

“COVID-19 and China,” with Elizabeth Economy

Why Political Freedom and Prosperity Go Hand in Hand

The China Model: Not One to Emulate
Previous
Next 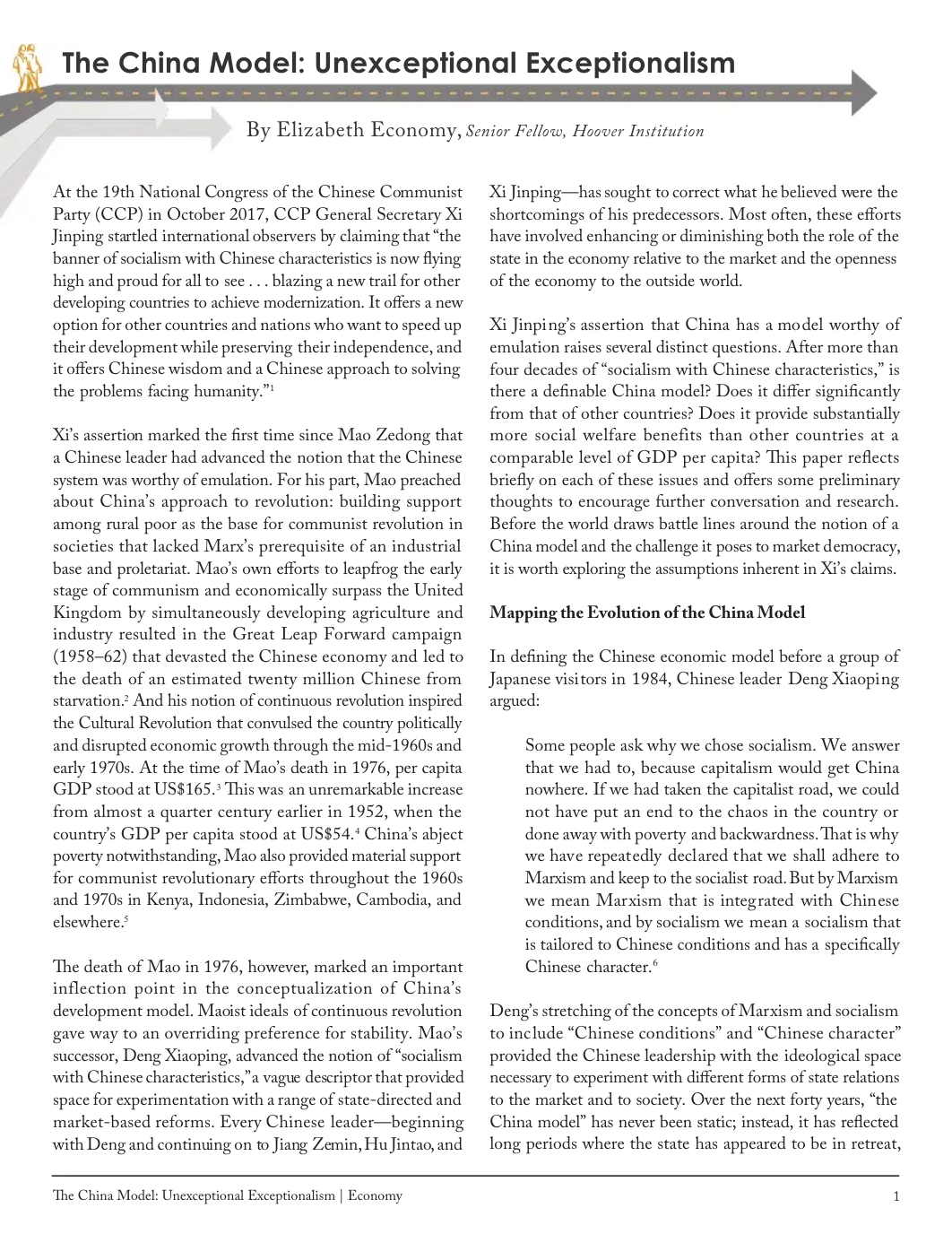 “At the 19th National Congress of the Chinese Communist Party (CCP) in October 2017, CCP General Secretary Xi Jinping startled international observers by claiming that “the banner of socialism with Chinese characteristics is now ﬂying high and proud for all to see . . . blazing a new trail for other developing countries to achieve modernization. It oﬀers a new option for other countries and nations who want to speed up their development while preserving their independence, and it oﬀers Chinese wisdom and a Chinese approach to solving the problems facing humanity.

Xi’s assertion marked the ﬁrst time since Mao Zedong that a Chinese leader had advanced the notion that the Chinese system was worthy of emulation. For his part, Mao preached about China’s approach to revolution: building support among rural poor as the base for communist revolution in societies that lacked Marx’s prerequisite of an industrial base and proletariat. Mao’s own eﬀorts to leapfrog the early stage of communism and economically surpass the United Kingdom by simultaneously developing agriculture and industry resulted in the Great Leap Forward campaign (1958–62) that devasted the Chinese economy and led to the death of an estimated twenty million Chinese from starvation. And his notion of continuous revolution inspired the Cultural Revolution that convulsed the country politically and disrupted economic growth through the mid-1960s and early 1970s. At the time of Mao’s death in 1976, per capita GDP stood at US$165. This was an unremarkable increase from almost a quarter century earlier in 1952, when the country’s GDP per capita stood at US$54. China’s abject poverty notwithstanding, Mao also provided material support for communist revolutionary eﬀorts throughout the 1960s and 1970s in Kenya, Indonesia, Zimbabwe, Cambodia, and elsewhere.

The death of Mao in 1976, however, marked an important inflection point in the conceptualization of China’s development model. Maoist ideals of continuous revolution gave way to an overriding preference for stability. Mao’s successor, Deng Xiaoping, advanced the notion of “socialism with Chinese characteristics,” a vague descriptor that provided space for experimentation with a range of state-directed and market-based reforms. Every Chinese leader—beginning with Deng and continuing on to Jiang Zemin, Hu Jintao, and Xi Jinping—has sought to correct what he believed were the shortcomings of his predecessors. Most often, these eﬀorts have involved enhancing or diminishing both the role of the state in the economy relative to the market and the openness of the economy to the outside world.

Xi Jinping’s assertion that China has a model worthy of emulation raises several distinct questions. After more than four decades of “socialism with Chinese characteristics,” is there a deﬁnable China model? Does it diﬀer signiﬁcantly from that of other countries? Does it provide substantially more social welfare benefits than other countries at a comparable level of GDP per capita? This paper reﬂects brieﬂy on each of these issues and oﬀers some preliminary thoughts to encourage further conversation and research. Before the world draws battle lines around the notion of a China model and the challenge it poses to market democracy, it is worth exploring the assumptions inherent in Xi’s claims.”