The Constitution was designed to protect individual liberties and prevent the centralization of power, making it uniquely suited to resist socialism.

“Socialism vs. the American Constitutional Structure: The Advantages of Decentralization and Federalism,” by John Yoo

“The Supreme Court’s Role in Restoring Federalism,” with John Yoo

“Executive Power in the Constitution,” with John Yoo

“The True Extent of Executive Power,” with John Yoo

“A Clash of Judicial Visions,” by John Yoo and James C. Phillips

National Review
Up Next Lessons from Socialism in East Germany

How the Constitution Prevents Socialism
Previous
Next

“Socialism vs. the American Constitutional Structure: The Advantages of Decentralization and Federalism” 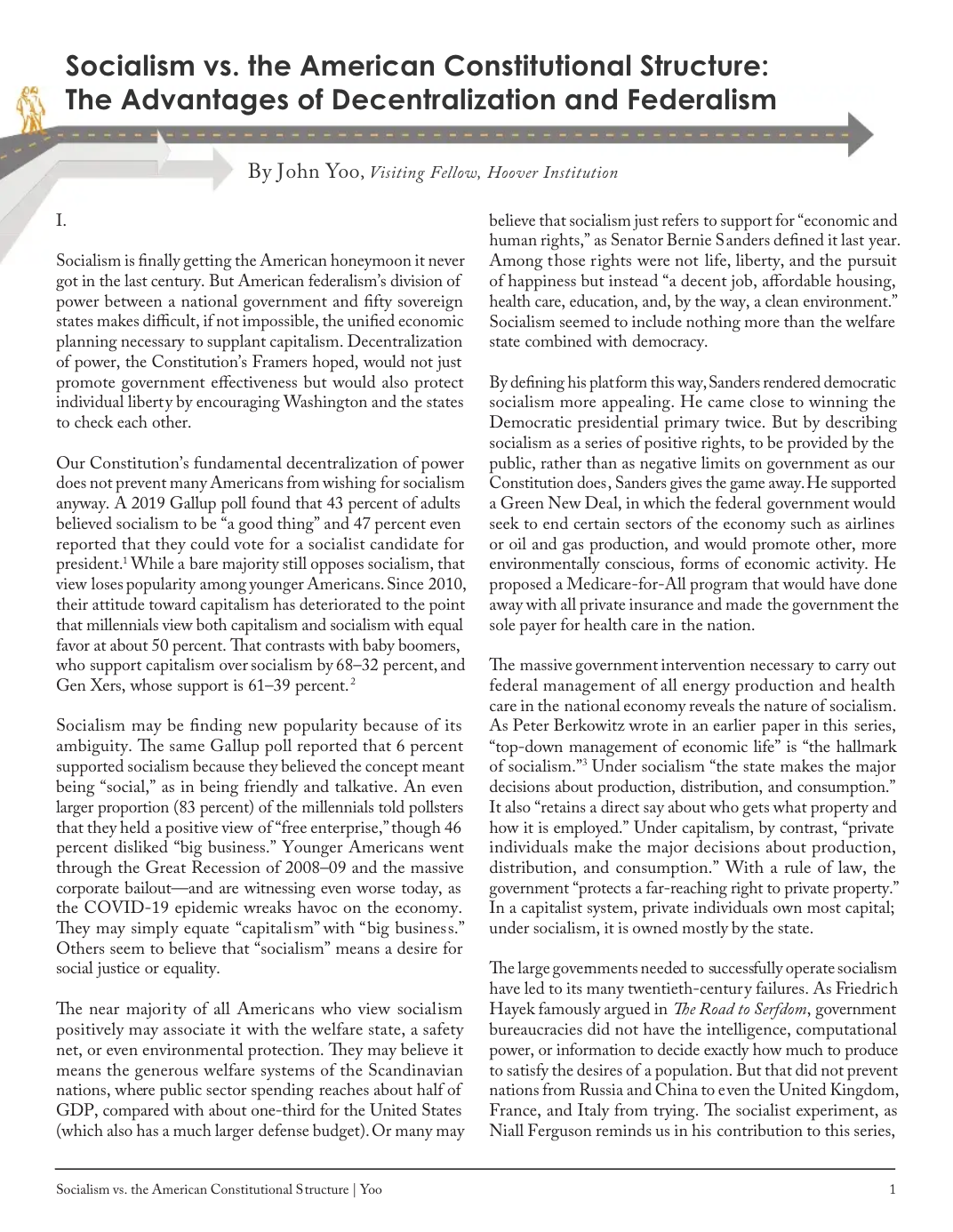 American history shows that federalism initially went too far in its protection of states. Slavery made plain the most obvious flaw in the Constitution’s original design—it failed to provide a minimum protection for individual rights against states as well as the federal government. Slavery deprived a specific race, brought to the United States from Africa, of the same rights enjoyed by the majority of Americans. The Constitution gave slave states a political advantage with the rule that slaves counted as three-fifths of a person for purposes of allocating House seats. The Civil War brought slavery to an end, and the Fourteenth Amendment’s guarantee of privileges and immunities, equal protection, and due process against the states sought to end the discrimination upon which slavery was built.

It would take, however, another century for the civil rights movement to force the United States to live up to the promise of the Reconstruction Amendments. Eventually, Congress would pass the 1964 Civil Rights Act, which prohibited racial discrimination in employment and education, and the 1965 Voting Rights Act, which barred racial discrimination in elections, to end the era of Jim Crow. These civil rights acts greatly extended the reach of federal power at the expense of the states. States could no longer use their police powers to engage in discrimination on the basis of race. But they also furthered federalism’s original purpose in forcing the national and state governments to compete to expand individual liberty. In the area of economic regulation, however, the national government so expanded its power that it undermined the decentralizing elements of federalism. Unlike the end of slavery, the broadening of federal power did not produce any corresponding expansion in individual freedoms. It was the Great Depression, in which the economy contracted by about 27 percent and unemployment reached a quarter of the workforce, that prompted the United States to experiment with socialist-type government. Upon the inauguration of Franklin D. Roosevelt in 1933, Congress enacted a series of laws—the National Industrial Recovery Act (NIRA) and the Agricultural Adjustment Act (AAA) chief among them—that granted the president extraordinary powers to manage the economy. Under the NIRA, for example, federal agencies issued industry-wide codes of conduct to govern production and employment levels. The AAA gave the administration the power to dictate the crops that farmers could plant. Using these laws, the Roosevelt administration sought to reverse falling prices by setting prices, limiting production, and reducing competition.