Back to top
Civics
The Human Prosperity Project
Contributing Scholar: Michael Auslin
The Modern-Day Choice between Free Markets and Socialism

China’s economic gains have come at a substantial cost to its people and to its neighbors, leading other nations to look to democracy and markets to deliver prosperity.

“How Freedom Is Caught between Socialism and Capitalism in the Indo-Pacific,” by Michael Auslin

“Freedom’s Struggle in the Indo-Pacific,” by Michael Auslin

“China versus Democracy,” by Michael Auslin

Michael Auslin on Engaging with China

Law and Liberty
Up Next Economic Growth: The Path to a Cleaner Environment

The Modern-Day Choice between Free Markets and Socialism
Previous
Next 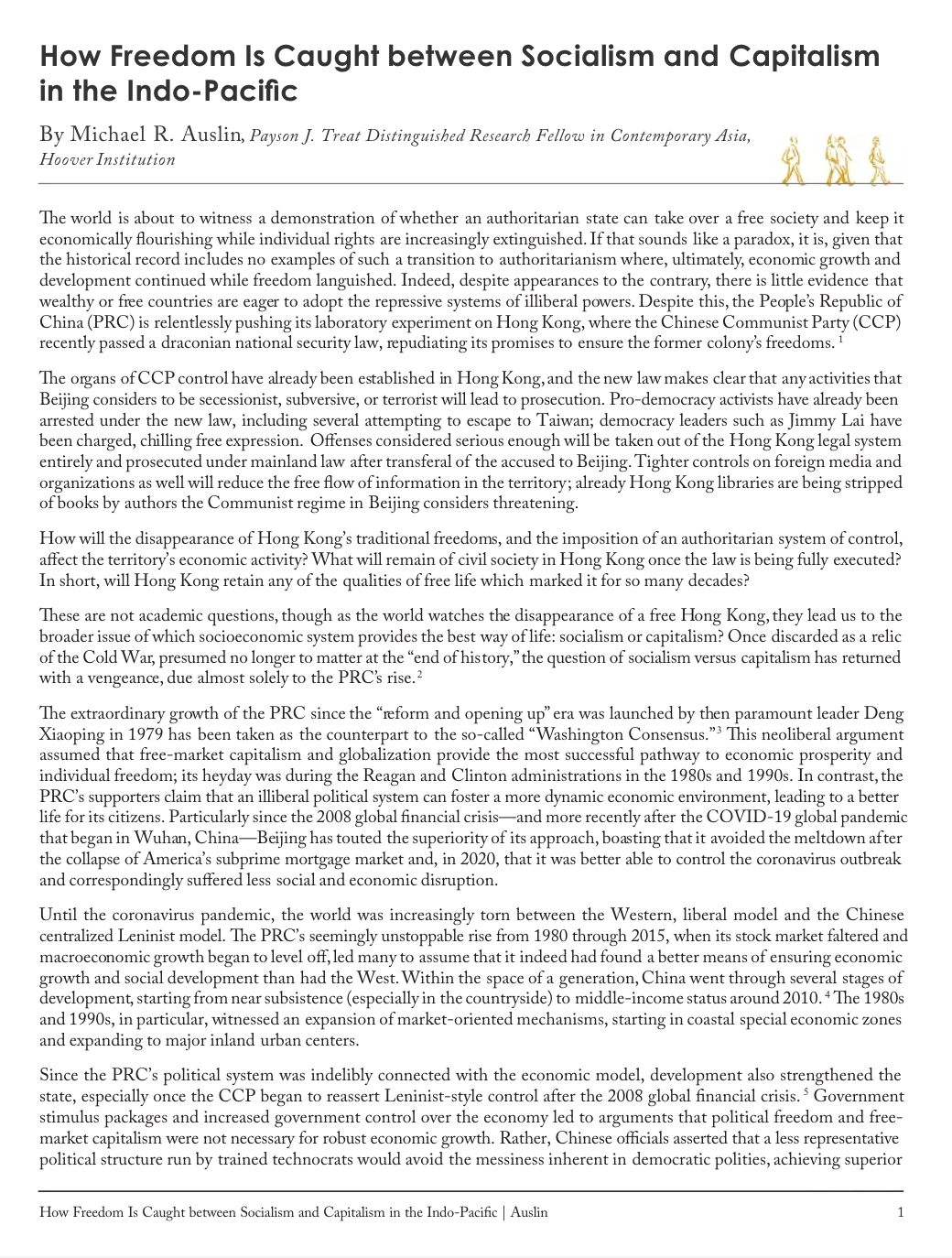 The world is about to witness a demonstration of whether an authoritarian state can take over a free society and keep it economically ﬂourishing while individual rights are increasingly extinguished. If that sounds like a paradox, it is, given that the historical record includes no examples of such a transition to authoritarianism where, ultimately, economic growth and development continued while freedom languished. Indeed, despite appearances to the contrary, there is little evidence that wealthy or free countries are eager to adopt the repressive systems of illiberal powers. Despite this, the People’s Republic of China (PRC) is relentlessly pushing its laboratory experiment on Hong Kong, where the Chinese Communist Party (CCP) recently passed a draconian national security law, repudiating its promises to ensure the former colony’s freedoms.

The organs of CCP control have already been established in Hong Kong, and the new law makes clear that any activities that Beijing considers to be secessionist, subversive, or terrorist will lead to prosecution. Pro-democracy activists have already been arrested under the new law, including several attempting to escape to Taiwan; democracy leaders such as Jimmy Lai have been charged, chilling free expression. Oﬀenses considered serious enough will be taken out of the Hong Kong legal system entirely and prosecuted under mainland law after transferal of the accused to Beijing. Tighter controls on foreign media and organizations as well will reduce the free ﬂow of information in the territory; already Hong Kong libraries are being stripped of books by authors the Communist regime in Beijing considers threatening.

How will the disappearance of Hong Kong’s traditional freedoms, and the imposition of an authoritarian system of control, aﬀect the territory’s economic activity? What will remain of civil society in Hong Kong once the law is being fully executed? In short, will Hong Kong retain any of the qualities of free life which marked it for so many decades?

These are not academic questions, though as the world watches the disappearance of a free Hong Kong, they lead us to the broader issue of which socioeconomic system provides the best way of life: socialism or capitalism? Once discarded as a relic of the Cold War, presumed no longer to matter at the “end of history,” the question of socialism versus capitalism has returned with a vengeance, due almost solely to the PRC’s rise.