Though many believe that universal basic income (UBI) is an attractive alternative to current welfare policy, many features of a UBI would make it a destructive policy for the very recipients it intends to help.

“The Economic Impact of a Universal Basic Income,” by John Cogan and Daniel Heil

The Reality of Universal Basic Income

“The Case Against a Basic Income Guarantee,” by David Henderson

The Grumpy Economist
Up Next The China Model: Not One to Emulate

Why a Universal Basic Income Won't Work
Previous
Next

“The Economic Impact of a Universal Basic Income” 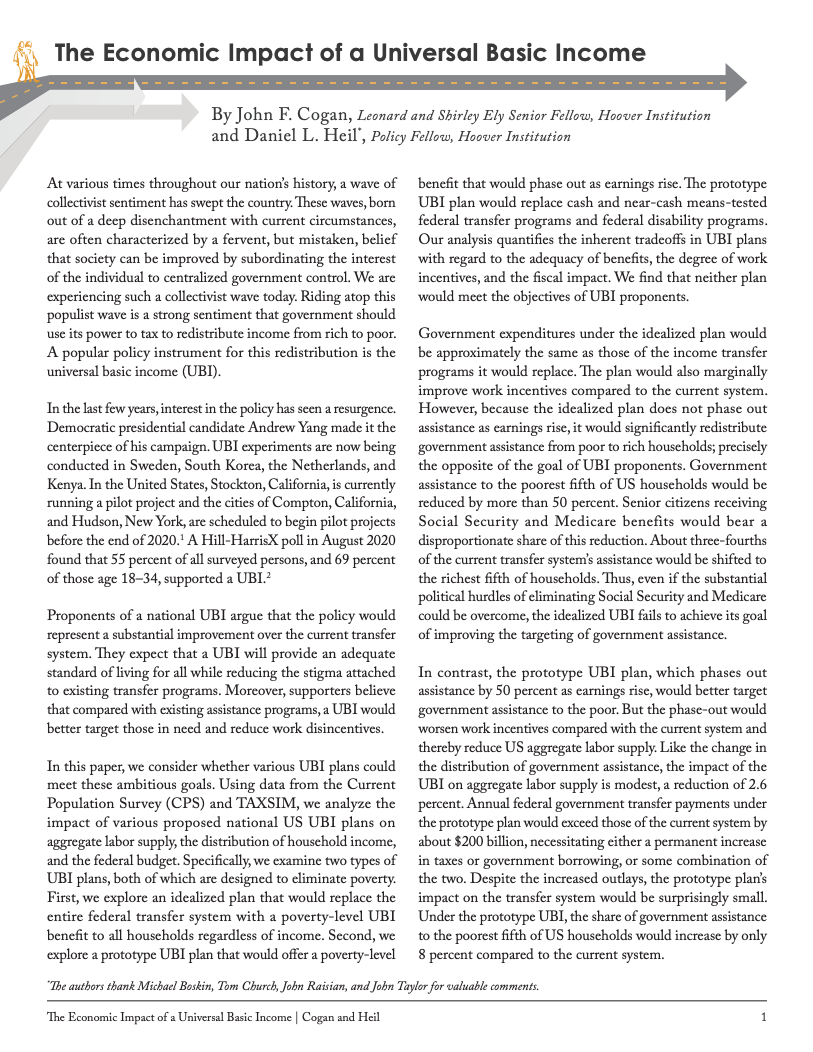 At various times throughout our nation’s history, a wave of collectivist sentiment has swept the country. These waves, born out of a deep disenchantment with current circumstances, are often characterized by a fervent, but mistaken, belief that society can be improved by subordinating the interest of the individual to centralized government control. We are experiencing such a collectivist wave today. Riding atop this populist wave is a strong sentiment that government should use its power to tax to redistribute income from rich to poor. A popular policy instrument for this redistribution is the universal basic income (UBI).

In the last few years, interest in the policy has seen a resurgence. Democratic presidential candidate Andrew Yang made it the centerpiece of his campaign. UBI experiments are now being conducted in Sweden, South Korea, the Netherlands, and Kenya. In the United States, Stockton, California, is currently running a pilot project and the cities of Compton, California, and Hudson, New York, are scheduled to begin pilot projects before the end of 2020. A Hill-HarrisX poll in August 2020 found that 55 percent of all surveyed persons, and 69 percent of those age 18–34, supported a UBI.

Proponents of a national UBI argue that the policy would represent a substantial improvement over the current transfer system. They expect that a UBI will provide an adequate standard of living for all while reducing the stigma attached to existing transfer programs. Moreover, supporters believe that compared with existing assistance programs, a UBI would better target those in need and reduce work disincentives.