As a result of ideological sorting, political parties are far more polarized today than they were before.

“An Era of Tenuous Majorities” by Morris Fiorina

“The Temptation To Overreach” by Morris Fiorina

“Independents: The Marginal Members of an Electoral Coalition” by Morris Fiorina

“The (Re)Nationalization Of Congressional Elections” by Morris Fiorina

“Is The US Experience Exceptional?” by Morris Fiorina

“Surprise: Voters Aren't More Polarized than Ever, Only Pols and Media Are” by Morris Fiorina

Morris P. Fiorina on The State of the Electorate

Morris Fiorina On Why Political Parties Have Polarized
Previous
Next 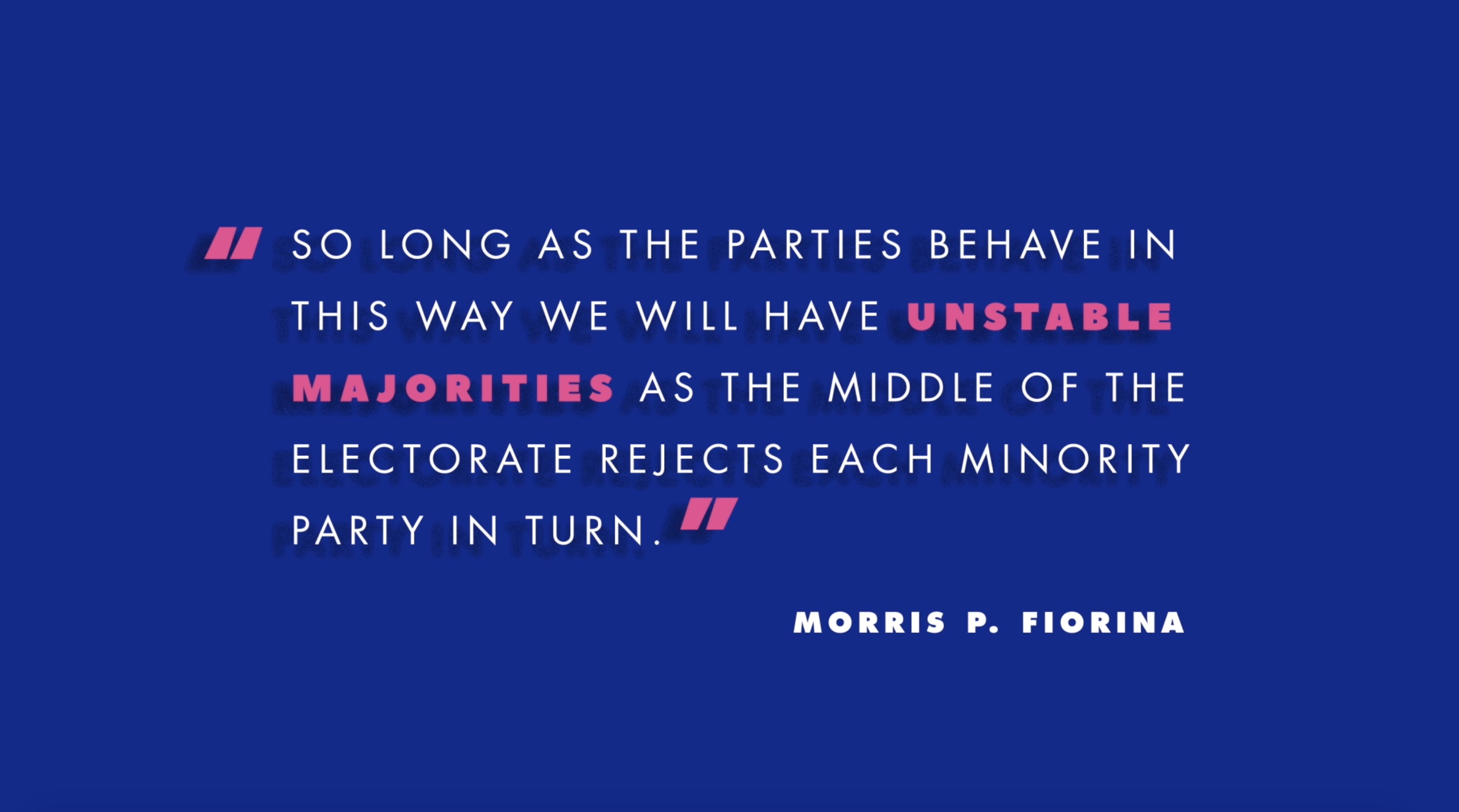 When we look at how citizens classify themselves ideologically, we find no change since the 1970s, with “moderate, middle-of-the-road” registering as the plurality position today, as it did then. When we look at particular issues, even very contentious ones like abortion, we again see little change. Majorities consistently favor something between the liberal and conservative poles. If we look at partisan affiliations, the picture is even less consistent with the polarization narrative. Rather than flock to one party or the other, Americans increasingly refuse to pledge allegiance to either: Today, more than 40 percent of the public claims to be independent.

What has happened in the United States is not polarization, but sorting. Consistent with the historical norm in two-party systems, in the mid-20th century our parties were “big tents.” The Democrats were a slightly left-of-center party with a significant conservative wing and the Republicans were a somewhat right-of-center party with a significant liberal wing. Today, conservative Democrats and liberal Republicans are all but extinct.

Two features of the sorting process merit emphasis. First, it is top-down. The congressional parties began to sort in the late 1950s, or even earlier, some argue, but there was little reflection in the electorate until the 1980s. Second, sorting is highly correlated with political interest and involvement. The political class — office seekers, donors, party and issue activists, and partisan media commentators — is very well sorted; ordinary citizens much less so. For example, the national party platforms could not be farther apart on abortion, but according to the 2016 American National Election Study, one-fifth of self-proclaimed strong Democrats are pro-life and one-third of self-proclaimed strong Republicans are pro-choice.

Rather than flock to one party or the other, Americans increasingly refuse to pledge allegiance to either.

The political class is the public face of politics. These highly sorted, politically active people are those whom you see, hear and read about on television and the internet. But they are not representative of the broader public; they are abnormal. There are about 235 million eligible voters. Forty percent of them did not vote in the 2016 elections. Less than 10 percent attended any kind of meeting, rally or demonstration — for any candidate. Only 2 or 3 percent did any work for a campaign — any campaign. About 1 percent of Americans have a print or digital subscription to the New York Times or the Wall Street Journal. Each day about 1 percent of them watch Fox News or The Rachel Maddow Show. At the same time that a few Americans are watching Anderson Cooper and Don Lemon on CNN, about the same number are tuned into shows on Nick at Nite. The vast majority of Americans are going about their daily lives as they always have, largely disengaged from politics and certainly not girding for civil war.

None of this is to discount the problems created by our sorted parties. They share little common ground, and the fact that each represents only a minority of the public and fights to win a majority in every election creates an incentive for each of them to make the other look bad rather than attempt to solve the problems our country faces. But the fault does not lie in a polarized citizenry; it lies in two sorted parties that attempt to impose their narrow visions on a large, diverse country.

For more, read “Polarization Is Not the Problem” by Morris Fiorina. Available here.