To raise necessary revenue with minimal damage to the economy, we should lower marginal rates, broaden the base, and simplify the tax code.

"Economists and Taxes" by John Cochrane

"We Need Corporate Tax Reform" by Richard A. Epstein 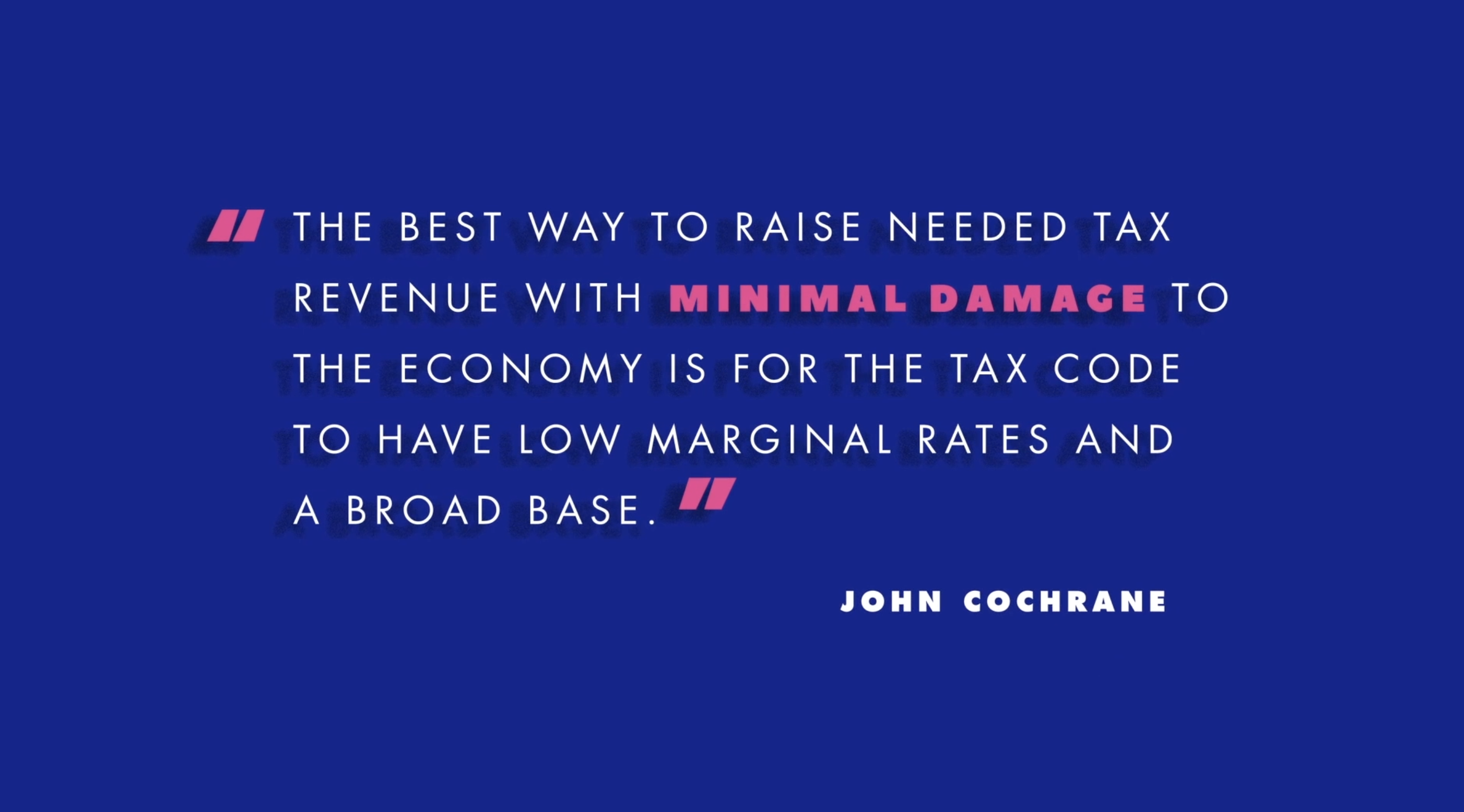 “The public and politicians analyze taxes entirely through the lens of who gains and who loses. Income redistribution, yes, but also redistribution from renters to homeowners, married to unmarried, young to old, city dwellers to farmers, Texans to Californians, and so on. The political and popular discussion is about taxes, and who pays what.

Economists serve best when they offer thoughts outside the standard left-right partisan divide. Our first function should be always to remind people that marginal tax rates matter to the economy not taxes.

Our second insight is always to analyze things comprehensively. The federal income tax is not what counts, the entire wedge between work and consumption matters. Whether the corporate tax is progressive or not does not matter, whether the overall tax code is progressive (plus the overall spending code, and forced cross-subsidy code!) matters. Don't tax wine over beer to redistribute; tax goods evenly and achieve progressivity through a progressive income (or better, consumption) tax, or spend money on programs to help people whose distress is correlated (imperfectly) with beer drinking.

Economists may feel their moral sentiments about redistribution are really important. But we have little professional reason to argue our feelings are better than anyone else's. What we can argue is, if you're going to do more or less redistribution, do it efficiently and comprehensively.

In this context, the current tax reform proposal, and its instant dismissal from self-identified Democratic economists, echoing political rhetoric, is a deep disappointment.

The economists' tax reform starts with a detailed breakdown by income. (I'm caving to political reality that our nation is obsessed with income, not more meaningful measures of economic advantage and disadvantage.) Then, we create a tax reform in which each group pays the same amount (ideally, bears the same burden), but trades lower marginal rates for fewer deductions, exemptions, and for the reduction or elimination of taxes that either highly distort economic activity or lead to lots of inefficient avoidance (corporate, rates of return, estate).

In short, we aim for a revenue-neutral, redistribution-neutral, reform. We recognize that eventually tax rates must be high enough to cover spending. There isn't a big need to argue over Laffer effects. Even if scored as statically revenue neutral, when the economy booms, revenue flows in, and we have paid off the debt we can start lowering rates. We recognize that if the structure if the tax reform is fixed, we can later continue to argue over the right amount of redistribution.”