In the New Orleans school system after Hurricane Katrina, we get the rare opportunity to observe what happens when vested interest power is removed from the equation, and decision makers are free to do whatever seems to work in seeking real reform.

"The Politics of Institutional Reform: Katrina, Education, and the Second Face of Power," by Terry M. Moe

Listen to "Terry Moe on Educational Reform, Katrina, and Hidden Power" on EconTalk with Russ Roberts

Learn more about "The Politics of Institutional Reform"

Hoover.org
Up Next The Inequality We Should Worry About

The Politics of Institutional Reform
Previous
Next 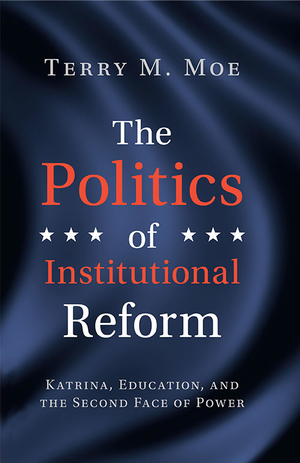 The Politics of Institutional Reform: Katrina, Education, and the Second Face of Power
by Terry M. Moe

In this groundbreaking analysis, Terry Moe treats Hurricane Katrina’s aftermath as a natural experiment that offers a rare opportunity to learn about the role of power in the politics of institutional reform. When Katrina hit, it physically destroyed New Orleans’s school buildings, but it also destroyed the power of the vested interests that had long protected the city’s abysmal education system from major reform. With the constraints of power lifted, decision makers who had been incremental problem-solvers turned into revolutionaries, creating the most innovative school system in the entire country.

The story of New Orleans’s path from failure to revolution is fascinating. But more important, it reveals the true role of vested interest power, whose full effects typically cannot be observed—because power has a “second face” that is hidden and unobservable. Making use of Katrina’s analytic leverage, Moe pulls back the curtain to show that this “second face” has profound consequences that, under normal conditions, stifle and undermine society’s efforts to fix failing institutions.