The US Constitution creates a balanced system of government that is uniquely equipped to resist socialism.

“Socialism and the Constitution,” by Michael McConnell

“The Bill of Rights with Michael McConnell”

“Socialism vs. the American Constitutional Structure: The Advantages of Decentralization and Federalism,” by John Yoo

“How the Constitution Prevents Socialism” with John Yoo

“The President Who Would Not Be King: Executive Power under the Constitution,” by Michael McConnell

Hoover Institution
Up Next How the Constitution Prevents Socialism

Constitutional Safeguards Against Socialism
Previous
Next

“Socialism and the Constitution” 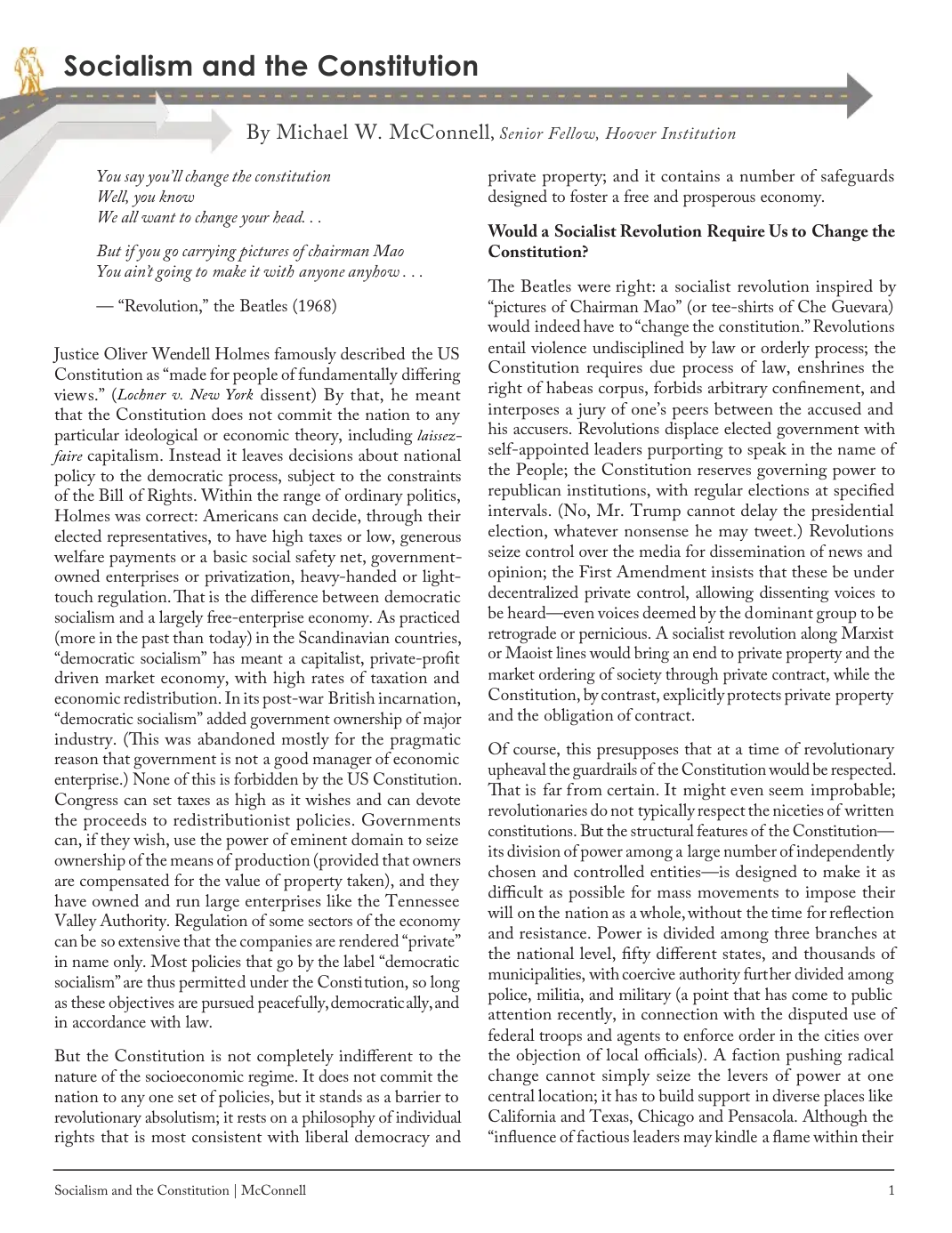 Justice Oliver Wendell Holmes famously described the US Constitution as “made for people of fundamentally diﬀering views.” (Lochner v. New York dissent) By that, he meant that the Constitution does not commit the nation to any particular ideological or economic theory, including laissez-faire capitalism. Instead it leaves decisions about national policy to the democratic process, subject to the constraints of the Bill of Rights. Within the range of ordinary politics, Holmes was correct: Americans can decide, through their elected representatives, to have high taxes or low, generous welfare payments or a basic social safety net, government-owned enterprises or privatization, heavy-handed or light-touch regulation. That is the diﬀerence between democratic socialism and a largely free-enterprise economy.

As practiced (more in the past than today) in the Scandinavian countries, “democratic socialism” has meant a capitalist, private–proﬁt driven market economy, with high rates of taxation and economic redistribution. In its post-war British incarnation, “democratic socialism” added government ownership of major industry. (This was abandoned mostly for the pragmatic reason that government is not a good manager of economic enterprise.)

None of this is forbidden by the US Constitution. Congress can set taxes as high as it wishes and can devote the proceeds to redistributionist policies. Governments can, if they wish, use the power of eminent domain to seize ownership of the means of production (provided that owners are compensated for the value of property taken), and they have owned and run large enterprises like the Tennessee Valley Authority. Regulation of some sectors of the economy can be so extensive that the companies are rendered “private” in name only. Most policies that go by the label “democratic socialism” are thus permitted under the Constitution, so long as these objectives are pursued peacefully, democratically, and in accordance with law.

But the Constitution is not completely indiﬀerent to the nature of the socioeconomic regime. It does not commit the nation to any one set of policies, but it stands as a barrier to revolutionary absolutism; it rests on a philosophy of individual rights that is most consistent with liberal democracy and private property; and it contains a number of safeguards designed to foster a free and prosperous economy.