Though many believe socialized medicine will keep health care costs low, the costs of single-payer systems extend far beyond the taxes required to support it.

“The Fraud of Single-Payer Health Care” by Scott Atlas

“Would Medicare for All Make Fighting Coronavirus Easier or Worse?” with Scott Atlas

Hoover Institution
Up Next Laboring in Vain: How Regulation Affects Unemployment

False Promises: What Single-Payer Fails to Deliver
Previous
Next

“The Costs of Regulation and Centralization in Health Care” 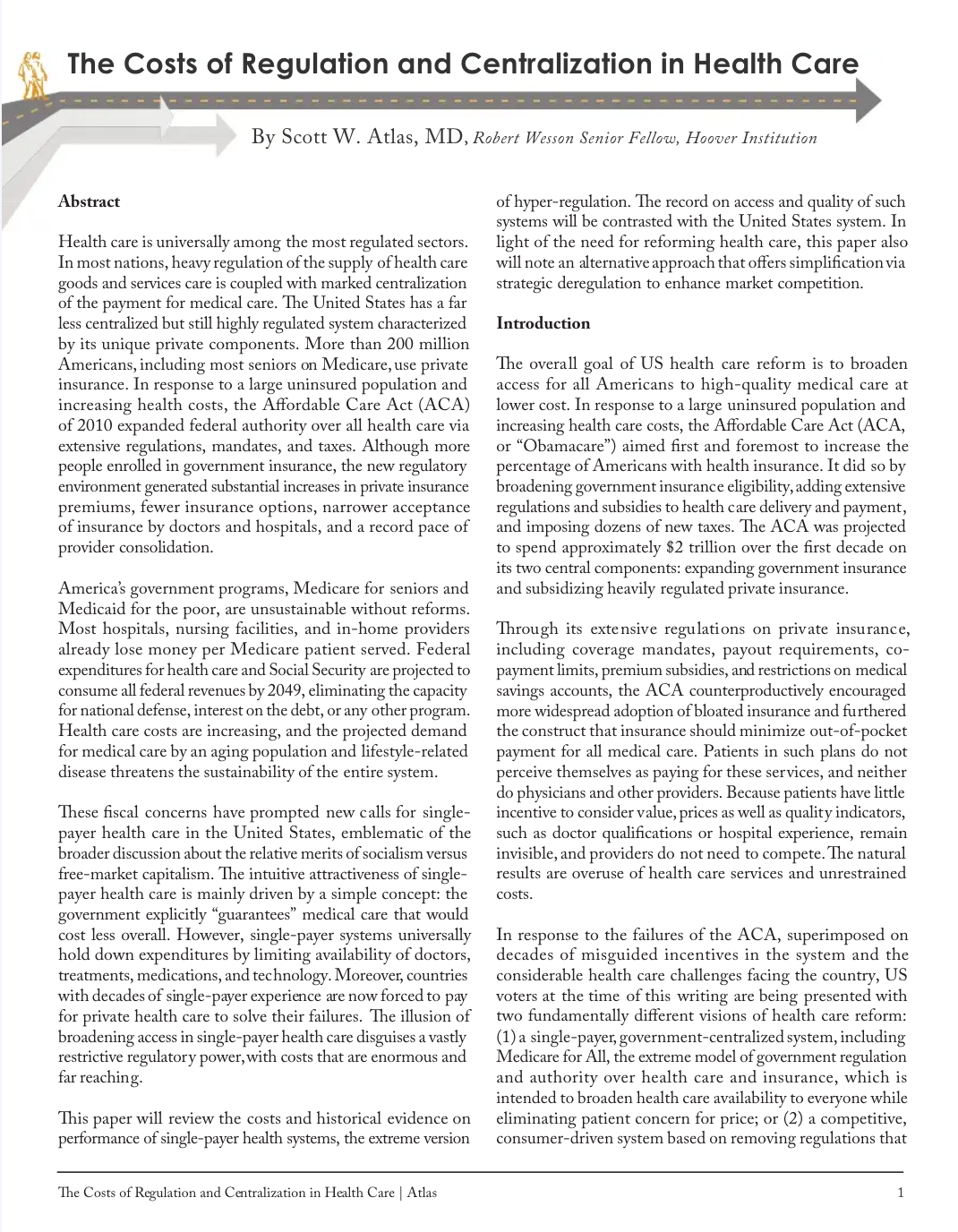 Health care is universally among the most regulated sectors. In most nations, heavy regulation of the supply of health care goods and services care is coupled with marked centralization of the payment for medical care. The United States has a far less centralized but still highly regulated system characterized by its unique private components. More than 200 million Americans, including most seniors on Medicare, use private insurance. In response to a large uninsured population and increasing health costs, the Affordable Care Act (ACA) of 2010 expanded federal authority over all health care via extensive regulations, mandates, and taxes. Although more people enrolled in government insurance, the new regulatory environment generated substantial increases in private insurance premiums, fewer insurance options, narrower acceptance of insurance by doctors and hospitals, and a record pace of provider consolidation.

America’s government programs, Medicare for seniors and Medicaid for the poor, are unsustainable without reforms. Most hospitals, nursing facilities, and in-home providers already lose money per Medicare patient served. Federal expenditures for health care and Social Security are projected to consume all federal revenues by 2049, eliminating the capacity for national defense, interest on the debt, or any other program. Health care costs are increasing, and the projected demand for medical care by an aging population and lifestyle-related disease threatens the sustainability of the entire system.

These fiscal concerns have prompted new calls for single-payer health care in the United States, emblematic of the broader discussion about the relative merits of socialism versus free-market capitalism. The intuitive attractiveness of single-payer health care is mainly driven by a simple concept: the government explicitly “guarantees” medical care that would cost less overall. However, single-payer systems universally hold down expenditures by limiting availability of doctors, treatments, medications, and technology. Moreover, countries with decades of single-payer experience are now forced to pay for private health care to solve their failures. The illusion of broadening access in single-payer health care disguises a vastly restrictive regulatory power, with costs that are enormous and far reaching.

This paper will review the costs and historical evidence on performance of single-payer health systems, the extreme version of hyper-regulation. The record on access and quality of such systems will be contrasted with the United States system. In light of the need for reforming health care, this paper also will note an alternative approach that offers simplification via strategic deregulation to enhance market competition.