The US Debt—Causes and Consequences

What Do We Mean By Debt And Deficits?

The federal government is borrowing at unprecedented rates. Spending regularly exceeds revenue, and this shortfall is predicted to grow dramatically in the near future. The result is a large and growing federal debt that threatens future Americans’ prosperity and security.

What are the consequences of this higher federal debt and what can we do about it?

To understand the consequences of the federal debt, it is helpful to understand a few related terms like deficits and debt.

Here is Hoover senior fellow John Taylor explaining how the debt and the deficit are related:

The deficit is the difference between how much the government spends and how much revenue it collects over a fiscal year. The inverse, when revenue exceeds spending, is called a surplus. Every year’s deficit adds to the total federal debt.

Debt held by the public refers to the money that the federal government has borrowed from the public that it has yet to pay back. It is often referred to as “net debt.” An alternative measure of the federal debt is the gross debt. It includes net debt plus money owed to federal trust funds (e.g., Social Security Trust Fund, Medicare’s Hospital Insurance Trust Fund) and other intragovernmental debt. You can read more about the differences between net and gross debt here.

In 2018, the federal government ran a deficit of $779 billion, or about 3.8% of US GDP. Debt held by the public totaled $15.7 trillion (78% of GDP). Going forward, deficits are expected to rise every year. By 2022, federal spending will exceed revenue by over $1 trillion, or about 4.7% of GDP. It only gets worse from there. By 2048, the government’s annual shortfall will exceed 9.6% of GDP according to projections from the Congressional Budget Office (CBO). These massive deficits will push net debt above 150% of GDP over the next 30 years.

You can see detailed 30-year projections of the federal debt and a breakdown of future government spending and revenue with the America Off Balance Budget Calculator.

What Are The Economic Consequences Of Higher Debt?

Government borrowing isn’t necessarily bad. For example, borrowing that goes to finance infrastructure improvement could make future generations wealthier. Borrowing is a much bigger problem when it pays for today’s consumption, particularly during good economic times. Such borrowing offers no chance of yielding returns on investment. Instead, it burdens future generations with higher debts and threatens to make them poorer.

Rising interest rates and increasing deficits threaten to build upon each other to send public debt spiraling upward even faster. When treasury debt holders start to doubt our government’s ability to repay, or to attract future lenders, they will demand higher interest rates to compensate for the risk. If current spending and tax policy continue unaltered, higher interest costs will have to be financed by even more debt. More borrowing puts more upward pressure on interest rates, and the spiral continues.

This debt spiral threatens the economy in many ways. In the worst-case scenario, the government has so much trouble borrowing money that interest rates rise dramatically. Lenders might begin to worry about the government’s ability to pay back the debt or they might be concerned that the government will devalue the dollar to lower its real obligations.

Even without the worst-case scenario, there are significant economic consequences to higher borrowing.

When the federal government borrows more, it becomes more expensive for businesses and entrepreneurs to invest. This “crowds out” private investment, which ultimately means lower wages and fewer opportunities. Economists debate the magnitude of this effect but, given current debt projections, the economic effect could be massive. In this 2013 article, Boskin finds that unless spending is brought under control, the “rise in debt will cut US living standards by roughly 20% in a generation.”

There are other economic consequences from increased borrowing. In this video, Boskin reminds us that, without spending cuts, borrowing today will mean higher taxes in the future:

These higher taxes will weaken the future economy. This is particularly true if Congress opts to raise tax rates. You can learn more about the impact of higher tax rates on the economy here.

Are There Other Reasons To Be Concerned About The Debt?

Beyond the economic consequences, we should be concerned about how the debt will limit policy options for future policymakers.

Interest payments currently account for 7.9% of federal spending. By 2048, over 21% of spending will go to servicing the debt. These substantial interest payments and high debt levels could prevent policymakers from investing in important government policies like education or infrastructure.

This is especially dangerous for American national security. Former secretary of defense General James Mattis argues that failing to reduce the debt will have significant consequences for the nation’s military and security. He notes, “No nation in history has maintained its military power while failing to keep its fiscal house in order.”

Is There A Tipping Point?

As we have seen, higher debt levels will threaten the prosperity and security of the next generation. In a worst-case scenario, we could enter a dangerous debt spiral that would force policymakers to enact significant tax increases or dangerous spending cuts.

When would that happen? Unfortunately, no one can predict exactly how much debt is too much. Boskin et al warn:

Unchecked, such a debt spiral raises the specter of a crisis. Some may think that such concerns are overblown, as there is no current evidence in financial futures markets that a crisis is on the horizon. But a debt crisis does not come slowly and visibly like a rising tide. It comes without warning, like an earthquake, as short-term bondholders attempt to escape fiscal carnage. Only in hindsight are we able to see the stresses building and bemoan that we did not act.

Making matters worse, the crisis will likely come when the United States is already facing challenging times. John Cochrane notes that “the crisis typically comes in bad times—when in a war, recession, or financial crisis, the government suddenly needs to borrow a lot more and markets doubt its ability to repay.”

Even before meeting the worst-case scenario, however, there are ample reasons to control the debt. As we a have said, further increases in federal borrowing could weaken the future economy and the threaten the safety of next generation.

Avoiding the debt crisis won’t be easy. Many think we could solve the problem by cutting defense spending. Future defense spending, however, represents only a small share of the federal budget. Currently, defense spending accounts for just 15% of total spending; by 2048, it will represent less than 9%.

In 2011, Congress attempted to reduce deficits by cutting defense spending. The Trump administration has reversed some of the defense cuts, but even with the recent increases, defense spending is projected to fall to 2.5% of GDP in 2029. That level will be the lowest since 1940.

With such a small share of the future budget going to defense spending, it would require massive cuts to the military to just keep debt from rising above today’s level. To restrain the growth of debt above current levels we would need to cut defense spending by 78%. That is an immediate 78% reduction in military salaries, procurement, and operations.

Why Not Raise Taxes?

If cutting defense spending isn’t a viable option, how about increasing taxes? This solution might sound attractive, particularly if the tax increases would apply only to wealthy Americans. However, unfortunately, any large tax increase would come with significant economic downsides.

The amount of revenue needed to keep deficits manageable would likely require steep tax increases on the middle class. Limiting the increases to high-income earners would require incredibly high marginal tax rates that would discourage work and investment. The ultimately result is that the economy would be smaller, and the revenue gains would fall far short of the revenue needed to reduce future deficits. Here is John Cochrane with more details:

In sum, we’re at a pretty high marginal tax rate already. The notion that we can just blithely raise another 10% of GDP from “the rich” alone without large economic damage does not work.

There are tax reform proposals worth considering. Most of these would involve replacing large portions of the nation’s existing income tax code with consumption taxes. You can read more about the economic effects of consumption taxes in Michael Boskin’s Blueprint for Tax Reform.

What Is The Solution?

Finding a solution to the debt problem should begin by asking where future spending will go. As we have seen, the answer isn’t defense spending. Instead, most of the future budget will be spent on major entitlement programs: Social Security, Medicare, and Medicaid.

By 2048, two-thirds of noninterest spending will go to just Social Security, Medicare, and Medicaid. That means that avoiding a future debt crisis will require significant reforms to these programs. Such reform will not only reduce future debt burdens but will also ensure the federal government has sufficient resources for essential government services. In the Blueprint for America, George Shultz discusses how entitlements are the main threat to other spending:

These automatic spending prospects mean that the basic functions of government tend to be crowded out of adequate funding. For example, funding for defense is now at a low and inadequate level. Our basic infrastructure is in need of extensive work to bring it to levels that are safe, functionally adequate, and visually appealing.

Fortunately, there are entitlement reform proposals that improve the nation’s budget outlook while protecting current retirees and poor Americans from benefit cuts. This video by John Cogan explains our current entitlement programs and highlights the type of reforms needed to put these programs on a sustainable course.

Beyond reforming entitlement programs, a key to improving the nation’s budget outlook is finding policies that boost economic growth. The federal budget is closely linked to the economy. Tax revenues rise as the economy grows, and a better economy tends to reduce spending on low-income assistance programs. The result is that deficits tend to shrink that faster the economy grows.

John Taylor explains the relationship between deficits and the economy is this video:

How can we get higher economic growth? There are many policies like tax reform, regulatory reform, and immigration reform. You can learn more about the importance of economic growth and ways we can improve growth rates here.

The good news is that there is time to improve the nation’s fiscal outlook. But we need to start soon. Adopting substantive entitlement reforms today will mean smaller reforms that would avoid hurting current recipients. And, adopting pro-growth policies will make the debt far more manageable in the future.

If we wait, the threat of a future debt crisis will be larger, the economy will be weaker, and the fiscal options available to future policymakers will be fewer.

At America Off Balance, visitors can take a tour through popular budget reform options or discover new reforms using the Budget Calculator.

Economists Michael Boskin, John Cochrane, John Cogan, George Shultz, and John Taylor discuss how out-of-control debt will harm the economy and caution that the debt crisis is likely to come without warning.

In the Blueprint for America, Hoover fellows outline a series of fiscal and regulatory reforms that will put the budget on a more sustainable track. Reforms include reforming entitlement programs, improving the nation’s immigration system, and reducing the regulatory burden on businesses.

In a 2018 op-ed, John Cogan shows that entitlements are “the primary cause of chronic budget deficits.” Solving the problem, Cogan argues, will require reforming entitlement programs, which calls for presidential leadership.

On his blog, The Grumpy Economist, John Cochrane responds to a common suggestion that higher taxes are the best solution to solving the nation’s debt problem. The post shows that entitlement spending is responsible for the lion’s share of future deficits, and that the economic downsides of raising taxes are large. 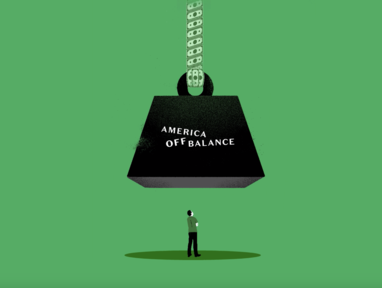 America Off Balance: One Nation Under Debt 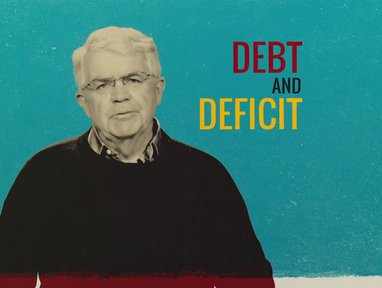 The Debt and The Deficit 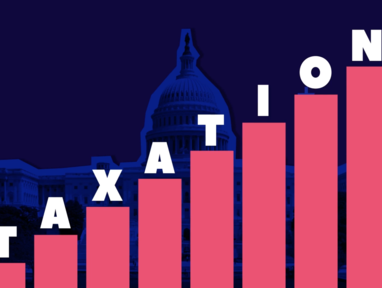